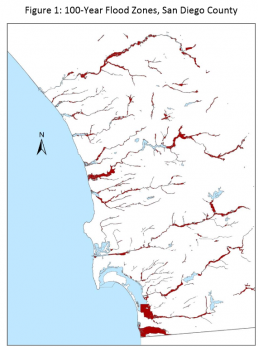 A new report by the National University System Institute for Policy Research (NUSIPR) has some grave warnings for San Diego County. The report states that roughly 55,000 residents and 5,000 businesses could be located in “100 year flood zones."  These areas could see flooding during the upcoming El Nino, which is forecast to be extremely severe.

According to the National Oceanic and Atmospheric Administration (NOAA), El Niño is a period of unusually warm ocean temperatures in the Pacific Ocean near the equator which can cause severe weather around the globe, including droughts, floods, and fires in various regions.

Locally El Nino typically produces extreme amounts of moisture that can cause flooding, especially along riverbeds. The NUSIPR report could be a stark wakeup call, ironically in the midst of a severe drought, that San Diegans should prepare for severe flooding.