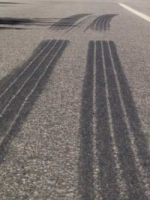 May 24 2013 (San Diego East County)- An elderly man in his eighties has been taken into custody after he led police on a wild chase through the mountains of East County.

Incident Page Network (IPN) first reported the chase at 2 p.m. on Thursday. According to IPN, the suspect was driving his 26-foot motor home through Sunrise Highway with Sheriff’s deputies in pursuit at around 50 miles per hour. Officials confirm that the chase started in Alpine and continued eastbound on I-8, until they finally caught the man in Buckman Springs after laying down tire spikes to slow the vehicle. The motorist was reportedly distraught, IPN reported.

IPN reported that the elderly driver also attempted to run over a deputy. The Sheriff's department later confirmed that no one was injured, and the suspect is now being held in custody.