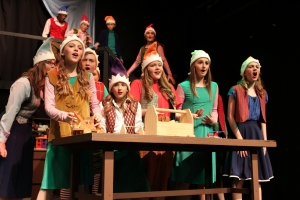 December 11, 2018 (Spring Valley) - Do you believe? If you currently need more holiday spirit or if your holiday spirit abounds and for all you in-betweeners, Elf Jr. brings us the Christmas magic everyone seeks. You will love Buddy the Elf and leave the show with a huge smile. The production continues through December 16th at the Encore Theatre in Spring Valley.

Elf Jr. is a bit of a shorter version of the original Elf. It might have been awhile since you watched Will Farrell's zest for Christmas on screen, so let me remind you of the story. The musical starts at the North Pole, in Santa's workshop. Buddy is an overgrown inept elf. Santa has raised Buddy, but it's time for Buddy to know the truth. He is human. Santa sends Buddy to find his human father in New York, with nothing but a name, a workplace and plenty of Christmas verve. 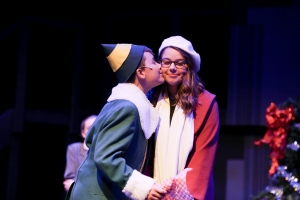 Jackson Muns plays Buddy and his enthusiasm exploded across the stage. He is like a Will Ferrell's version of Mini Me.  It has been a long time since I watched Elf, but I remember Ferrell's eagerness and child-like love of everything Christmas as he tries to get everyone to believe in Santa. Muns matched or even surpassed this passion--a true star of this show.

Paris Carter plays Jovie, the girl Buddy likes. She has a beautiful voice and Buddy convinces her to sing to find her belief in Christmas. He says if you want to believe, sing a Christmas song loud so everyone can hear. There is magic in hearing Christmas songs, uplifting your spirit. Another person doing a great job was Lissa Gray as Deb, his dad's assistant. Blake Brown, plays Buddy's dad, sort of the villain in the story; astern, workaholic dad. Jamie Kramer played his brother Michael. He did a great job, so mature for a tiny guy. Julia Swann plays the mom. Thanks to the whole cast for making us believe.

The book was written by Thomas Meehan & Bob Martin, with music by Matthew Skiar and lyrics by Chad Beguelin. The production is directed by Marisa Musgrove, with music director Matthew Ignacio and choreographer Wilfred Paloma.

My favorite song was the opening number, "Happy All the Time." Costumes are festive with plenty of Christmas red and green. The show does a great job of making the kids look like mini adults. There are also a lot of scene changes in the show and the cast does a wonderful job of moving all the furniture and props to the right spots.

This is a show for kids of all ages, from 3 to 93. Come out for Elf Jr. and let Buddy's infectious love of Christmas and the joyous cast spread a little holiday magic into your life.

Coming soon to the Encore: