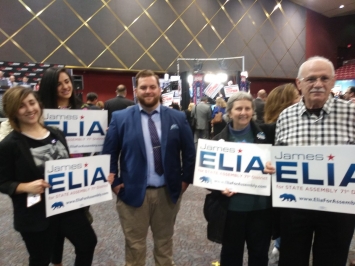 Update June 6, 2018 -- Across both San Diego and Riverside County, with 100% of precincts tallied but not late mail-in or provisional ballots, according to the Califiornia Secretary of State the results are:  Randy Voepel 44.5%,  James Elia 31.3%, and Larry Wilske 24.2%.

Photo by Jonathan Goetz, who also contributed to this report

June 5, 2018 (San Diego's East County) -- In the 71st Assembly district held by  Republican Randy Voepel, with 15.3% of precincts counted, Voepel is on top in San Diego County with 44.13% but Democratic challenger James Elia is in second with 32.2% of the vote among the roughly 34,000 ballots tallied so far.

In conservative Riverside County, which has a small percentage of voters, Wilske is actually ahead of the incumbent. Among Riverside's roughly 3,000 votes counted thus far, Wilske has 35.26%, followed by  Elia at 33.17%, and Voepel at just 31.57%. Voepel has strongest name recognition in East County, where he formerly served as mayor of Santee.

"We laid it all on the line, we've knocked on as many doors as we can and we look forward to the end of the night and we're confident we're going to November," Elia, an accountant, said tonight.

The district is heavily conservative, meaning Elia would need to pull substantial numbers of non-Democratic votes to win. He is running on  platform of fighting for the middle class and working people. He has also called for a state investigation into the frequent power outages that SDG&E has implemented across the backcountry, among other issues.

These are early returns; in addition to the nearly 85% of precincts not yet reported in San Diego County, there are also late mail-in ballots and provisionals that have not yet been counted.  In Riverside, 26 of 67 precincts have been tallied as of 10:40 p.m. this election night.