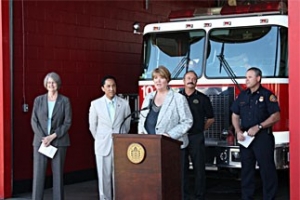 "My last campaign is a firehouse bond, and that will be on the November 2016 ballot," she said. "That would create a fund that can only be spent building fire stations." Emerald aims to have the bond fund construction of 19 new fire stations in addition to 47 that the city already has, though the initiative process won’t be complete until after she leaves office.

Following the 2007 firestorms, Senator Dianne Feinstein convened a Senate hearing in San Diego at which criticism was leveled at city leaders over the fact that San Diego failed to meet national standards for fire stations per capita.  That gap became woefully apparent in neighborhoods such as Rancho Bernardo, that suffered heavy fire losses.

Emerald led efforts to improve public safety during her tenure on the Council which began in 2008, following a 30-year journalism career that included consumer affairs reporting at Channel 10 News.

She was diagnosed with breast cancer last year and though her doctors have reportedly given her a positive prognosis, she has said the crisis made her reassess her priorities in life.  Recently remarried following death of her first husband, Emerald has endorsed her chief of staff, Ricardo Flores, to fill her seat.

Emerald also championed workers’ rights, winning a major victory for taxi drivers, and immigrants in district 9, which includes some of San Diego’s most diverse communities such as City Heights. She previously represented a district that included inland communities such as Del Cerro and Allied Gardens, before moving into district 9.

Emerald has endorsed her chief of staff, Ricardo Flores, to fill her seat in the 2016 election.