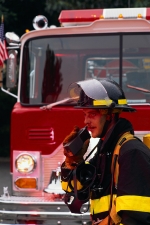 mum on whether he will take action

“The primary function of government is keeping its citizens safe,” said Councilmember Emerald. “I will not stand down until adequate public safety resources are restored to our neighborhoods.”

The plea from Councilmember Emerald asks the Mayor to use surplus funds in the 2011 appropriated reserves. According to the fiscal year 2011 report from the Comptroller and Chief Financial Officer there will be $3 million in the reserves.

According to Emerald $2.6 million of the reserves could be used to reactivate four of the eight “browned out” engines, while also paying to restore lifeguards and their necessary training.

“Dollars stashed away in reserve accounts serve no one while safety is jeopardized and property is destroyed because of budgetary posturing,” said the Councilmember in her press release.

Death of a San Diego toddler who choked on a gumball recently has been widely blamed on brown-outs, since emergency responders were delayed in arriving because the closest fire station was browned out.

Proposed cuts to Cal-Fire could make this reinvestment even more critical, since Governor Brown has proposed to reduce the number of firefighters on an engine from four to three during peak fire season-a move that will diminish resources for fighting wildfires in East County as well as other emergencies locally.

It is still unclear what Mayor Sanders plans to do about the proposal, as East County Magazine’s multiple requests for comments were not answered.