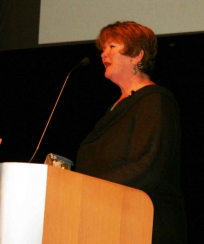 Part II of the Forging a Sustainable Future Conference will be held March 3 and 4 at San Diego State University.  For tickets and details click here. If you missed Part I of this important event, ECM is publishing a series of articles highlighting presentations by key speakers last November, starting with these colorful opening statements.

February 9, 2012 (San Diego) – Councilwoman Marti Emerald, a former TV consumer affairs journalist called on San Diegans to join with her in calling for sustainable practices here in our community, and around the world during Part I of United Green's Forging a Sustainable Future conference in November 2011 . “This is survival, folks,” she said.

She brought a surprise guest: Cassis, a green-winged macaw who joined her onstage during opening remarks to drive homeher message. "You won't find these in the wild," Emerald said. "Their habitat has been destroyed."

Cassis squawked and spread his wings, strutted across the stage and clearly stole the show.

Emerald referred to the macaw, which is native to rainforests in Brazil, as a “canary in the coal mine” that warns of the impacts that broader environmental destruction may have on the human race. 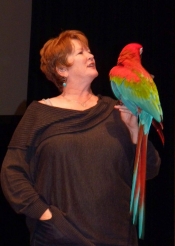 But sustainability isn’t just about environmental issues.  “It means making sure we are bringing up future generations of young people who are trained in jobs for the fut

ure,” she said, adding that “80 percent of California kids who are registered at colleges have to go into remedial education.  This is a crisis.” At the same time, ironically, here in San Diego some 36,000 jobs are going unfilled because employers can’t find people who are qualified, she said.

Another key issue that will determine the future of San Diego will be the availability of water.  Emerald stressed the need for water conservation, citing a successful program that resulted in a 39 percent savings in water at multi-family households by encouraging renters to save water.  The program may soon be adopted statewide, she indicated.

Transportation is also a “key issue” for our region’s future, Emerald said.  “We have in the last 150 years in fossil fuels created greater climate change than the planet has ever seen,” she observed.  “we can’t keep putting dirt up in the atmosphere.”  One way to reduce pollution and greenhouse gas emissions is to shift our culture toward transit-oriented development, encouraging people to use public transportation, and adding energy-efficient housing near trolley and bus lines.

Food sustainability is another key component of her vision for San Diego’s future.   “Why should people have to get permits to plant food?” she asked.  City Council recently passed an “urban agriculture” ordinance to make it easier for city res

idents to grow vegetables and fruits, as well as owning chickens for eggs, miniature goats for milk, and bees to make their own honey.

“Our refugee and immigrant community members really crave to farm,” said Emerald, who praised New Roots Garden for introducing new varieties of foods for all San Diegans to savor.  Emerald has been involved in helping to identify more locations for community gardens and has even taking up canning her own foods.  It’s about eating seasonally and eating what you can put up for the rest of the year,” she said.  By eating locally grown foods,  city residents can help reduce fuels used to transport foods long distances, while also eating healthier.

“How do we protect Mother Earth in order to protect ourselves—and pass a legacy on to our children?” Emerald asked the audience, which included students and community members as well as environmental and sustainability experts.   She then quoted Mahatma Gandhi: “We all need to be the change we want to see in the world.”