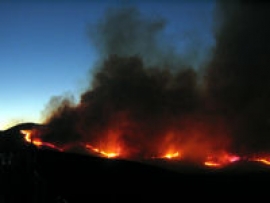 June 13, 2012 (San Diego) -- San Diego Gas and Electric has agreed to pay the City of San Diego $27 Million to settle a lawsuit over the 2007 wildfires.  Councilmember Marti Emerald is asking the Mayor to reinvest this cash windfall back into public safety.
The councilmember recommends spending $18 million to design and build critically needed fire stations, citywide, as recommended last year in the Citygate Report on San Diego’s emergency preparedness.

“For the sake of public safety we must act on the Citygate Report so we can respond to daily emergencies within nationally acceptable time limits, and be better prepared for future disasters”, said Councilmember Emerald in a memo to Mayor Jerry Sanders.