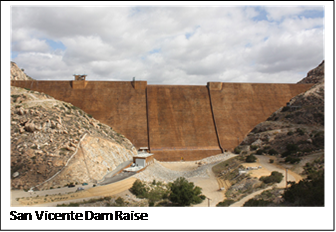 July 24, 2016 (San Diego) - The Emergency & Carryover Storage Project, a multi-decade effort of the San Diego County Water Authority to increase the reliability and resiliency of the region’s water system, won an Award of Merit in the annual Global Best Projects competition held by the industry publication Engineering News-Record. It is the second time in four months that a Water Authority project has earned international honors.

The $1.5 billion storage project is a system of reservoirs, interconnected pipelines and pumping stations designed to make water available for the San Diego region in the event of an interruption in imported water deliveries, for instance by drought or earthquake. The projects were constructed between 2000 and 2014, providing increased flexibility to store and move locally controlled water supplies around the county. One testament to the value of the projects is that the Water Authority stored 100,000 acre-feet of conserved water behind the San Vicente Dam Raise shortly after its completion in 2014, creating a significant hedge against future dry years.

“The Emergency & Carryover Storage Project is an extraordinary accomplishment in every way, and it’s gratifying for it to be recognized by leading international infrastructure experts,” said Mark Weston, chair of the Water Authority’s Board of Directors. “It took more than three decades of planning, investments and engineering expertise to execute this visionary strategy, along with extraordinary focus and determination by the Water Authority and its 24 member agencies.  Everyone who played a part in the project – from our contractors to our staff – is proud that they helped secure the future of San Diego County for our children and grandchildren.”

In April, the Claude “Bud” Lewis Carlsbad Desalination Plant was named Desalination Plant of the Year for 2016 by Global Water Intelligence, publisher of periodicals for the international water industry. That award was given to “the desalination plant … that represents the most impressive technical or ecologically sustainable achievement in the industry.” The Carlsbad plant is the centerpiece of a public-private partnership between the Water Authority and Poseidon Water to make the region’s water supplies more resilient to drought.

Winners of the Engineering News-Record awards were chosen by an independent jury of industry professionals based on safety, innovation, contribution to the global community, aesthetic quality and workmanship, and the global diversity of the project team. Thames Water’s Lee Tunnel in the London Borough of Newham was named the Global Best Project in the water and wastewater category, while the sole Award of Merit in the category was presented to the E&CSP in San Diego County.

The major components of the project are:

Lake Hodges Pipeline and Pump Station – A pipeline completed in 2007 connected Olivenhain Reservoir to Hodges Reservoir, providing access to 20,000 acre-feet of emergency water in Hodges Reservoir. A pump station to generate power and move water between the two reservoirs was completed and became operational in 2013.

In total, the E&CSP added more than 190,000 acre-feet of locally controlled storage capacity, and is expected to meet the county’s emergency water needs through 2030.

Besides the Global Best Project, the E&CSP recently was honored as the 2016 Project of the Year by several organizations, including the United States Society on Dams and the San Diego chapters of the American Society of Civil Engineers, the Construction Management Association of America, and the American Public Works Association.

A complete list of Engineering News-Record award winners is at www.enr.com/blogs/13/post/39808-enr-announces-global-best-projects-winners.