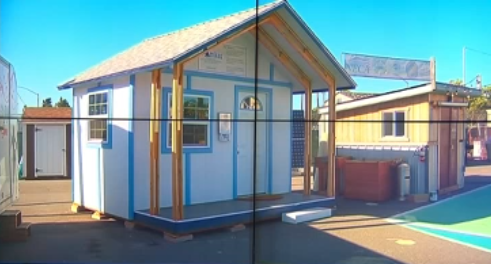 July 15, 2020 (El Cajon) – Last year, the nonprofit Amikas built an emergency sleeping cabin as a demonstration project at a church in El Cajon. The group hopes to win city approval to allow similar units to be used to temporarily house homeless people, particularly women, including women veterans, amid the COVID-19 pandemic when local shelter space in East County is insufficient. 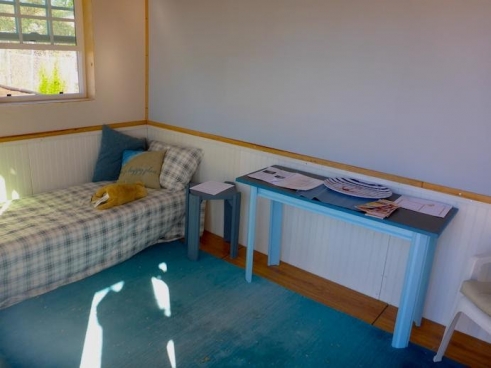 That requires a change in the city’s zoning ordinance, which the city will consider at a public hearing of the El Cajon Planning Commission on Tuesday, July 21 at 7 p.m.

An agenda report will be available 72 hours before the meeting. Due to COVID-19, the public may participate by emailing Anthony Shute at tshute@cityofelcajon.us and reference “Emergency Sleeping Cabins” in the subject line, or to attend via telephone call (619) 441-1742.

“All people deserve a safe place to sleep. Period. Studies have shown that extended periods of sleep deprivation take an extreme toll on our ability to function,” the Amikas website states. When we’re well rested, we have the best chance of being able to participate in making a healthy community. Quality of life increases while crime decreases.”

NBC 7 ran a report on Amikas last year, when the organization was in the process of building an emergency sleeping cabin in El Cajon.

The units can be built, fully furnished, for approximately $4,000 but do not include plumbing, so there are no bathroom or kitchen facilities, raising the question of where homeless residents would be able to access restrooms and showers for sanitation purposes. In some other cities, more elaborate tiny homes have sometimes been built with full amenities, but at substantially higher cost.

Another issue is whether the unit would be required to be on wheels to be mobile. One homeless person who formerly lived in  a tiny home on wheels told ECM that it was hard to sleep in and reminded him of being on a boat.

But with a shortage of shelter space in El Cajon for single adults and no shelters at all in other East County communities, emergency cabins could provide a far safer option for some homeless people to sleeping on the streets.

East County Magazine thanks the Facebook Journalism Project for support through its COVID-19 Local News Relief Fund Grant Program to help  sustain reporting on vulnerable local populations and rural communities. Learn more at #FacebookJournalismProject. You can donate to support our local journalism efforts during the pandemic at https://www.EastCountyMedia.org/donate.

There are portable buildings that are self contained. Toilets, sinks water, etc. Provide soap, shampoo and a toothbrush and the homeless will have a better life.