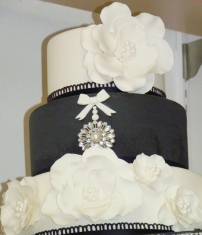 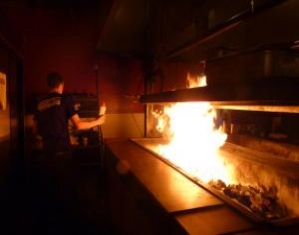 I ordered my own wedding cake with raspberry filling and whipped cream frosting from Grove Pastry Shop in Lemon Grove 36 years ago, as have so many other brides since the bakery first opened its doors back in 1947. The wedding cake portion of the business will continue; you can custom order those through www.artisticweddingcakesbythegrove.com .  But gone is the pastry shop, rich with the aromas of freshly baked cookies, cakes, breads and buttery pastries.

Teresa Johnson, who has owned it for the past decade, used only the finest ingredients and batches of creative recipes, all made with old-fashioned dedication to quality. The bakery won awards for its wedding cakes but also served up rich pastries and Teresa’s delicious fruity breads. Guests at East County Magazine events will remember the delicious cake pops and cup cakes she generous donated,  sometimes serving them up in person.

In an era of health-conscious consumers and rising ingredient costs (eggs have skyrocketed in the past year), Grove Pastry Shop was already struggling when the landlord demanded a $1,000 a month rent hike. 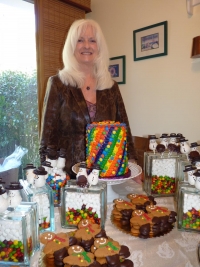 Johnson told the Union-Tribune, “I’m so sad. People are in shock and upset. It’s a heartbreak after 66 years—all the business, the family tradition of loving service from the staff and really good products. This place is tied to the community and customers.”

The shop first opened on Broadway in 1947 before the Ohlund family bought it and operated in from 1955 to 2002. In 1980, they moved it to its final location, a former general store in a Mission-style building at Main and Pacific Streets just behind the city’s iconic lemon.  Rick Rehan owned it from 2002 to 2005 before selling it to Johnson. The Ohlund family, which still owns the building, reportedly have indicated plans to sell or lease the site.

Pinnacle Peak is another long-time favorite, a Western-style steakhouse known for its insistence on casual wear and its tradition of snipping off neck ties; tens of thousands of them adorned the rustic walls.  People would wear their ugliest ties, all for the spectacle of having them snipped to the applause of patrons. I once saw a customer try to trick a waitress by wearing a chain-mail tie; unruffled, she soon found tools to part the wearer with his metal neckware. Most of all, the steakhouse  was also known for its mesquite wood-smoked steaks grilled over an open flame—bringing  generations of local residents back to savor the flavor.

The first Pinnacle Peak opened in Arizona, touting steaks for the working man. Locally, Pinnacle Peak has been East County’s cowboy steakhouse for over 45 years. 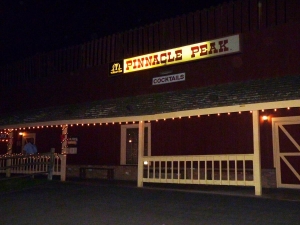 in San Diego County opened in El Cajon in 1969, with a huge central fire pit where patrons could watch those steaks sizzling, as well as sawdust on the floors.  I remember it well; we ate their often when I was growing up. My unsuspecting Uncle Oscar once lost a tie there-- snipped, labeled and later mounted on the wall to join legions of others.

Pinnacle Peak  moved to Santee in 1984, where the fire burned for over 30 years in a large yet rustic Western-style building. It had a big stone fireplace in a cozy bar yet also had ample room for parties; East County Magazine once held a party there that created memories we’ll cherish.

Then the city of Santee approved the property for condominiums and the restaurant was forced to move again. About a year ago they found a new home in Lakeside’s historic district on Maine Street just one block from the Lakeside rodeo grounds—seemingly a perfect place for a cowboy steakhouse. 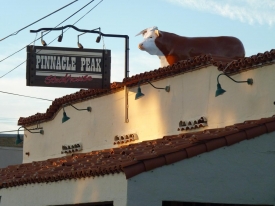 The new setting was smaller and fire regulations forced the cooking to be done out of sight—and smell—of customers.  The restaurant did bring along its iconic cow statue atop the building, a popular target of theft by high school students as pranks through the years.  Still, you could mosey up to the bar and order up a cactus cooler or a purple cowboy while awaiting a booth to enjoy your dinner. It remained the only Pinnacle Peak location in San Diego County.

I’d been thinking about those mesquite steaks and planned to stop by soon, when I saw a post on Facebook saying Pinnacle Peak had closed.  I hoped the poster was wrong, but when I went to the Pinnacle Peak San Diego website, I found this message: “We’ve c 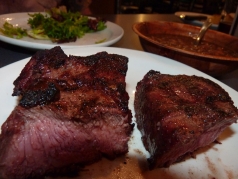 losed permanently. Thank you to everyone who has supported Pinnacle Peak for the last 45 years.”

I don’t know why Pinnacle Peak closed down.  Perhaps the owner assumed loyal customers would follow them from Santee to Lakeside.  The restaurant didn’t update its Facebook over the past year or so, and sent emails to its patrons and media only occasionally.  Would it have survived it Santee hadn’t pulled the plug on its long-time location, or if it had marketed more heavily?  Or was it simply a victim of changing times and a tough economy?

There’s one bit of good news: if you’re traveling, you can still find Pinnacle Peaks steakhouses in Tucson, Arizona as well as in California in Colton and San Dimas.

But for San Diegans, it’s the end of the trail for one of our region’s most memorable Western restaurants—as well as a beloved bakery. But they’ll live on, entwined with the remembered scents of sweet, yeasty dough and smoky, sizzling steaks for as long as we hold them in our memories.