February 12, 2012 (San Diego) – At this weekend’s California Democratic Convention, the statewide party issued pre-primary endorsements in three Congressional races but declined to make an early endorsement in two other races.

Support for single-payer healthcare, which keeps doctors and hospitals private but saves money by reducing administrative costs for insurance paperwork processing,  is part of the state party platform.  Ducheny ‘s campaign issued a press release last week slamming Vargas for “walking away from legislation that would provide universal access to health care and dental care coverage” after taking hundreds of thousands of dollars in insurance industry money. “Now we can see what this money has bought,” the mailer stated. 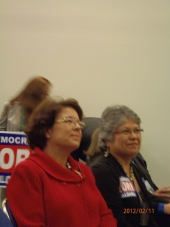 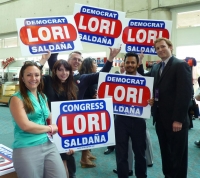 If you think one vote isn't important, here's an example of just how important it can be.With no party endorsement, neither Saldaña nor her opponent in the Democratic primary, former San Diego Port director Scott Peters, will be listed on the state or local party’s slate of candidates delivered to voters in June, nor be able to get help from party precinct walkers known as the "go" team. 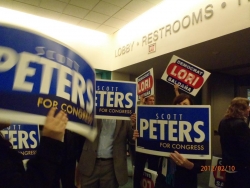 Nor can they access help from the  national DNC in the primary, even though The 52nd is among three races in California and 25 nationally that are targeted by the Democratic National Committee as potential “flip” districts where a Republican incumbent is considered vulnerable—in this case, Congressman Brian Bilbray.

Saldaña had pulled out all the stops, even securing a proxy for a hospitalized delegate.  She expressed disappointment in falling one vote short, but pledged to continue fighting to gain support from those who matter most: voters in the June primary. She stated that she intends to "keep working in winning support and endorsements, especially grassroots support."