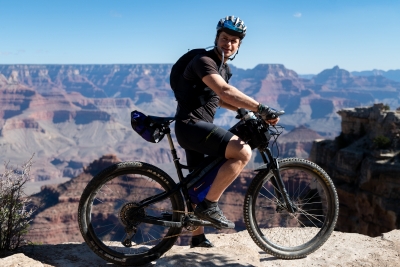 December 29, 2021 (Tecate) - Miron Golfman, a 28-year-old bicycle mechanic living in Anchorage, Alaska, is in San Diego this week to begin a 1,560-mile, ultra-endurance, solo bicycle ride through the Baja California peninsula to raise money for the ALS Association. Golfman said he already has raised $20,000 in pledges and hopes to exceed $50,000 in donations.

He is scheduled to start his trek at 12:01 a.m., Saturday, Jan. 1, from Tecate in Baja California. Golfman plans to ride on the Baja Divide, a route with dirt and sand roads that connects the Pacific Ocean and the Sea of Cortez. He hopes to arrive in Cabo San Luis in about two weeks.

It will be Golfman’s second time to ride along the Baja Divide. “It took me about 40 days from late February to April in 2021,” Golfman said. “But, this time, I hope to complete it in between 10 and 15 days, which would be a record for the fastest known time. I’ve been training for about 20 hours a week for several months. I’ll be thinking of my uncle every mile along the way.”

A nativer of Vermont, Golfman will be riding in honor of his uncle, Bruce Rosenblum of Boston, who is living with ALS, or amyotrophic lateral sclerosis, a progressive neurological disease often called Lou Gehrig’s disease. Golfman, who served as Rosenblum’s primary caregiver for three months (September to December) in 2020, will be accompanied on the cycling journey by three videographers, including his cousin Aaron, who is Bruce Rosenblum’s son. ALS officials are hoping to debut the film documentary about Golfman’s ride in May 2022 during ALS Awareness Month. Golfman also is scheduled the ALS Association national convention to be held in San Diego in mid-December 2022.

Rosenblum was diagnosed with ALS in 2017. Prior to the diagnosis, he led an actve life that included skiing and kayaking. “Three years ago, I dropped those activities, but I could still, with assistance, helm a small sailboat,” Rosenblum said in a statement. “Today, I use speech recognition in lieu of typing, move very short distances with a walk and spend my days in a motorized wheelchair.”

As Rosenblum’s caregiver, Golfman said, “During my time supporting my uncle Bruce, I developed an intimate understanding of the devastating effects ALS has on patients and their families. I came away with a newfound desire to live life to the fullest and not delay my lifelong dreams of athletics and cycling. I’m doing the ride to help expand disability awareness and bring attention to the global fight against ALS. ”

Donations can be made online at www.ridetoendure.com.

ALS, often called Lou Gehrig’s disease, named after the New York Yankee baseball player who passed away from ALS at age 37 in 1941, is a progressive neurodegenerative disease that affects neurons, or nerve cells, in the brain and the spinal cord. The progressive degeneration of the motor neurons in people living with ALS weakens muscles and impacts physical function. Eventually, people with ALS lose the ability to initiate and control muscle movement, which usually leads to total paralysis. Life expectancy for a person with ALS is within two to five years of diagnosis of initial symptoms. There is no cure, cause or no life-prolonging treatments for the disease.