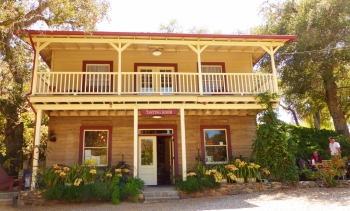 June 15, 2018 (Dulzura) – The pioneer-era Clark Ranch, home of the Dulzura Winery  in Dulzura, California dates back to 1885 and has remained in the Clark family to this day. Once known for its groves of olives and production of pickled figs, the land today is planted in vineyards and the former pickling house has been converted to a wine-tasting room, with a cozy guest cottage upstairs.

It’s an idyllic retreat for a peaceful stay in the country, miles away from city hustle and bustle, along historic Route 94. The name Dulzura means “sweet” in Spanish and may originally have referred to honey grown in the region.  Pioneering in Dulzura, a book written by Dorothy Clark Schmid, offered this picturesque description: “A rugged but sweet land, relaxed as its sun-based hills and deliberate as a prospector’s burro.” 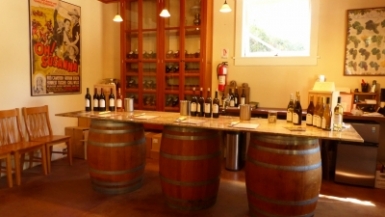 The original Clark homestead house is still standing, built in 1895, beside the tasting room/former pickling house built in 1908.  The winery launched in 2014 from vines planted in 2008 is run by Grant and Sarah Spotts.

“We get a lot of people who just want to get out of the city,” says Sarah, adding that guests include international visitors from Mexico, just down the road.

During my visit, Sarah poured a glass of Dos Amigos, a white wine blend of Viognier and Sauvignon Blanc that has a surprising touch of sweetness. Dulzura! The creation won a silver medal in the San Diego International Wine Competition.

The cottage upstairs has its own separate entrance via a private drive on the hillside above, 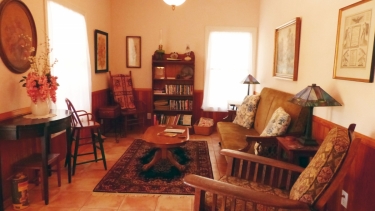 along with a shaded veranda. Formerly a spice room, it’s been used to house guests since the 1940s, now listed on Air B&B.

The  one bedroom has a queen bed plus there’s a fold-out antique sofa bed in the sitting room, ample room for a family with two children. The space also has a kitchen you can cook up dinner or breakfast in, plus a barbecue for your use – plus guests are encouraged to pick fresh produce from a large organic vegetable garden.

The wood-framed cottage  with Mexican paver tiled floors is appointed in antique furnishings, some from the old ranch house, and vintage framed art ncluding Pennsylvania German Fraktur b 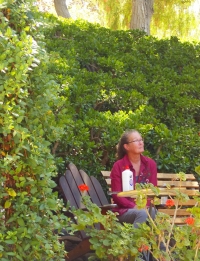 aptismal and birth certificates to complete the ambience of yesteryear.

Though smaller than in its heyday (some 1,100 acres of the ranch were deed to the federal government as public Bureau of Land Management property), the ranch is still home to wildlife including many birds such as barn owls, quail, orioles, 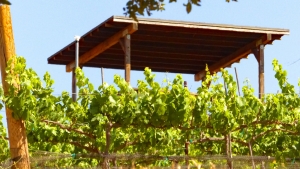 There’s a hiking trail loop, as well as Adirondack chairs on the property where you can sit and while away time, sipping a glass of sweet white or rich red wine on a summer’s afternoon or eve.

There’s also an observation platform atop the hilltop vineyard where you can enjoy panoramic views of the Otay mountain range and beyond.

The Dulzura Winery is one of a growing number of wineries sprouting up along historic Highway 94.  You can find more by visit the Wineries on Highway 94 website. 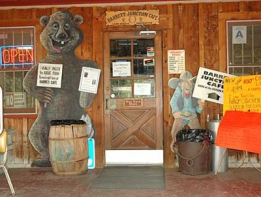 From Dulzura, you can head north toward Jamul and Spring Valley, or south and then east, skirting the Hauser Wilderness to Barrett Junction, then a steep climb beyond up a winding road that takes you to the towns of Potrero (with possible side jaunt to Tecate at the border) and Campo.

Dulzura is also close to Otay Lakes Road which leads you to Otay Lakes County Park, where you can go fishing, picnicking or hiking.

A popular casual dining spot south of Dulzura is the Barrett Junction Café and Mercantile , known for its Friday night fish fries though they also serve a variety of other home-style fare. The place is filled with vintage and antique décor and a gift shop, as well as a sign touting the story of the record-setting bass once caught at nearby Barrett Lake. 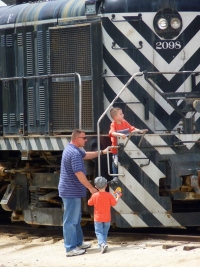 Campo, though quite a drive, has the Pacific Southwest Railway Museum to ride a vintage train on weekends or visit the Old Stone Store Museum, once home to a famous gun battle. There's also a museum upstairs honoring the Buffalo Soldiers, the African-American civil war cavalry unit last stationed in Campo.

The other direction leads you to the 6,100 acre Hollenbeck Canyon Wildlife Preserve, which requires a California Department of Fish and Wildlife lands pass to enter, or a valid state fishing or hunting license.

A short distance beyond is the Jamul Casino on tribal land, where there’s a Loft 94 Beer Garden on the second story terrace and the Prime Cut Steakhouse with pastoral views, as well as gaming and other eateries.

Beyond that lies the Sweetwater National Wildlife Refuge in Jamul and Spring Valley, where a short hike and pati ence can result in viewings of wildlife such as coyotes and raccoons. The Sweetwater River trail begins at the Steele Canyon bridge built in the 1920s.

Across from the historic bridge, look for a shopping center across the highway in Rancho San Diego, where Hooley’s Irish Pub and Grill has the ambience of the old country and was named best Irish pub outside of Ireland by an international group of Irish pub owners.  There’s also a movie theatre, grocery story, Target, an office supply store,  and restaurants in the complex ranging from pizza and barbecue to Italian and Middle Eastern, plus a candy store and several other retail outlets.

Rancho San Diego is also home to Cuyamaca Community College, which has a beautiful Water Conservation Garden worth a stroll through as well as the adjacent Heritage of the Americans Museum, with art and artifacts from North, Central and South America.

For golf lovers, there are also three golf courses in the Rancho San Diego area:  Steele Canyon, Cottonwood and Sycuan Golf Resort (formerly Singing Hills).  A couple of miles from Sycuan Golf is the Sycuan Casino, where a new highrise resort hotel is set to open in 2019 with several new restaurants.