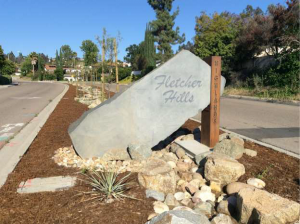 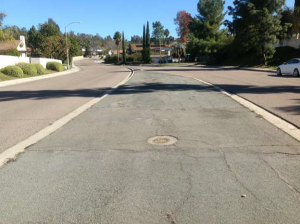 After nearly forty years of waiting, the homeowners of Fletcher Hills Highlands finally have, at the intersection of Valley Lake and Fanita Drives, a handsome, welcoming entrance to the community. The ugly slab of asphalt is gone, and in its place is a California native drought-tolerant landscape complete with rain harvesting bioswale, solar powered sprinkler system and distinctive granite sign.

Before deciding on native California plants, the Fletcher Hills Highlands Association (FHHA) considered many water-wise design options such as stamped concrete, large boulders, artificial turf and various hardscape materials. Ultimately the FHHA decided that a planting would be the most environmentally friendly – allowing the soil to absorb rainwater and the trees to reduce heat by shading the ground. The native species require a fraction of the water of a traditional landscape and the redwood bark mulch helps the soil retain the scant climatic moisture.

To create the most beautiful and effective design, the FHHA enlisted Greg Rubin, owner of California’s Own Native Landscape Design, Inc. and author of “The California Native Landscape: The Homeowner’s Design Guide to Restoring Its Beauty and Balance”.

Greg is a pioneer in the field of native landscape design and local ecology restoration.

He has worked on many local projects including those with Hubbell and Hubbell, The Lux Art Institute and the Agua Hedionda Discovery Center. His design includes striking manzanita species, colorful Cleveland sage (that turns Mission Trails’ hillsides purple) and graceful desert willow, as well as a functional bioswale that looks similar to a Mission Trails creek bed. All of the plant and quarry materials were locally sourced through Las Pilitas and Moosa Creek nurseries, JEB, and Southwest Boulder.

Because of the unconventional design of the median sign, the FHHA hired talented industrial artist/designer Tim Spann of Directional Graphics to fabricate and install it.

FHHA homeowners Karen Torrance and Judith Toepel managed the median improvement design, City of El Cajon coordination, and vendor contracts. The two were able to gain broad El Cajon City Council support for the project to the extent of securing $17,000 as partial reimbursement for the installation of a new water meter, without which the new landscaping would not have been possible. The total cost of the project was $66,000...$49,000 borne by FHHA. FHHA will also cover the cost of future landscape maintenance and irrigation.

“The path to achieving a successful median enhancement was long and sometimes unpredictable. But the support and enthusiasm of Fletcher Hills Highlands’ homeowners and board members brought the project to its stunning conclusion,” a press release from the two organizations announces. “The median is beautiful and ready to be enjoyed by the entire Fletcher Hills community.”