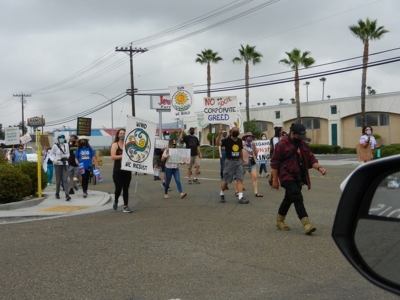 Organizers say this facility and SDG&E pollute surrounding environmental justice communities, harm health, and contribute to the climate crisis with gas sourced by fracking. They called on SDG&E to stop polluting East County communities and switch to renewable alternatives.

“The polluting nitrogen oxides from this plant expose residents to asthma and other health impacts in a disadvantaged community. This plant also relies on dirty energy contributing to devastating climate change effects like drought and wildfires, fracking our future,” a press release for the event stated. “El Cajon and San Diego residents call on Sempra to not renew the permit of this plant and replace peaker plants with safe, renewable local solar energy and battery storage.”

Specifically, the organizers contend that this plant exposes residents to asthma and other health impacts in a disadvantaged community. The majority of that neighborhood is nonwhite, and 43% of residents live in poverty. This area also has high rates of unemployment, linguistic isolation, and housing cost burden. By burning fracked gas in an already polluted area, Sempra is exacerbating community health issues. The air in this neighborhood is more polluted than 95% of nearby neighborhoods and experiences elevated asthma, low weight births, and cardiac disease. (All data from California EnviroScreen). 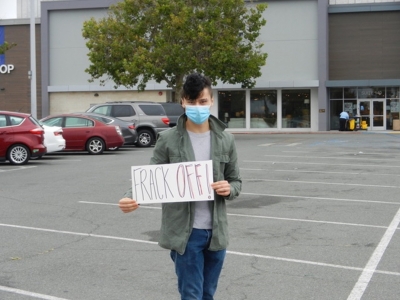 SDG&E has made a major push to invest in clean energy alternatives such as wind and solar, purchasing power from several renewable energy projects in the region. But the utility also continues to operate peaker plants powered by fossil fuels.

Danielle Wilkerson, a lifelong resident of East County and co-founder of East County BIPOC Coalition, said, “I’m disgusted that there are two power plants polluting the air in my neighborhood in El Cajon, and no one was made aware. We demand transparency from the city and Sempra, and we demand clean air.”

Dr. Vi Nguyen, Co-Founder of San Diego Pediatricians for Clean Air, has cared for San Diego children who are asthma patients for almost 15 years and is part of a coalition of 40 pediatricians that advocate for clean air.  She says, “It takes a lot to get me out of the clinic, and today rather than taking care of patients, I'm here to deal with the root cause of asthma - air pollution. We as pediatricians see it now."

“It is long past the time that methane burning like this was replaced by batteries, and a diverse source mix,” says Roger Coppock, a climate change activist who participated in the march and demonstration.

“By burning dirty fracked gas, a fossil fuel, SDG&E, and Sempra are making the climate crisis worse,” said Katie Meyer, Campaign Coordinator with SanDiego350. “We’re already experiencing higher temperatures, devastating wildfires, coastal flooding, drought, and other extreme weather impacts due to climate change. Our future is at risk, and we must drastically reduce carbon dioxide emissions to prevent even worse impacts. To do that, we need to stop burning fossil fuels.”

SanDiego350 volunteer and biology professor, Scott Kelley pointed out that methane gas is a 20-80 times more potent greenhouse gas than CO2, and is responsible for pollution, water contamination, earthquakes, and exposure to toxic chemicals. "Sempra Energy is doubling down on its fossil fuel fracked gas empire in the midst of a climate catastrophe”, he said.”The solution is clear. We need to shut down this power plant and leave fossil fuels in the ground.”

come on you fake environmental activists what will you do when you turn on your light and they are dark? or you plug in your electric car and nothing happens. YOU CAN NOT HAVE IT BOTH WAYS!!! idiots.