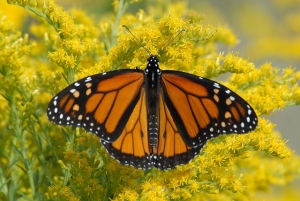 The suit claims the EPA has refused to review a large body of scientific evidence that environmental organizations submitted showing devastating impacts on Monarchs from glyphosate. Further, the suit suggests that glyphosate applied to farm fields have destroyed milkweed that migrating Monarchs must have to survive.

The suit blames glyphosate for the demise in populations of Monarch butterflies, which dropped from 1 billion in 1997 to just 56.5 million butterflies this winter.  Monarch migrations from Canada to Mexico provide dramatic annual spectacles here in California.

Roundup is popular with farmers due to its use on “Roundup Ready” crops genetically engineered to tolerate use of the herbicide.

Efforts to save Monarchs have included a $3.2 million campaign announced by the U.S. Fish and Wildlife Service.  Some environmental groups and other organizations have also launched efforts urging the public to plant milkweed.

Use of exotic milkweed strains, however, can actually cause harm to the butterflies and discourage them from migrating, so native species of milkweed are recommended for planting in our region.