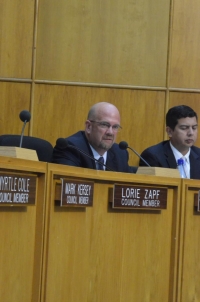 It is clear that San Diego would prefer the project to go to Santee.  One key reason is fire response, which San Diego Fire Department cannot do in a timely manner, due to the location of the nearest fire stations and how busy Santee roads can be at rush hour.  With annexation, Santee will have jurisdiction to dispatch fire engines and other emergency services.

Fourteen people spoke in opposition to the project and six registered support. Of those in favor, not surprisingly, there was the applicant, Pardee Homes, but also Santee Residents such as Melissa Kessler, who told Council that opposition “should not stop growth. It should not stop the future.” 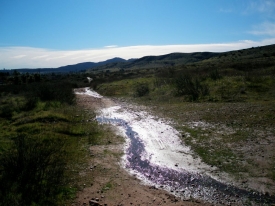 Absent from the Council Chamber were Marti Emerald, District 9, and Acting Mayor Todd Gloria. Due to the strong form of Mayor, Gloria is not expected to chair or sit in Council until the next Mayor is sworn in.

Before the session started ECM talked with Stephen Houlahan RN, an activist for Friends of East Elliot. He told ECM that the development will be built “on San Diego land to be jettisoned onto Santee.” His main concern “is that it is located directly under the Sycamore Canyon landfill, and so there are children whose families are going to buy those homes, and they are going to grow up there. Potentially for 18 years directly under that landfill, they are going to breath all that air, and potentially have ill effects.”

Houlahan raised the issue of battery dust and other hazardous materials that reach landfills, as well as the odor and dangers of methane, a natural side effect of decomposition. He added, “Other people can validate the fact that it smells over there. That land is malodorous, nauseating and [it is] hard to breathe on hot days.”

He added that this land acts as a bridge between the Mission Trails Regional Park and the Goodin Ranch and the Sycamore Canyon preserve. He raised these same issues before Council later on during the session.

Once the session got going, the people opposed to the project talked first. Jack Shu of the Cleveland National Forest Foundation said that this project violated the California Environmental Quality Act (CEQA) and does not meet SANDAG’s requirements of at least 15% access to public transit. This is bad development that “will take away from San Diego,” Shu testified.

After the meeting was over, he  stated that Council just voted for a rise in asthma among children who live close to the development, which is near well-transited roads. This is a link to one of the studies showing this: http://www.usc.edu/uscnews/stories/11614.html

Other residents brought up the specter of the 2003 Cedar fire. Evacuation during the 2003 fire from Santee was not easy. This would add more people to an area that is already  congested during high traffic times. An evacuation  could prompt parking lot conditions on Mast Boulevard, opponents argued. That said, Bill Figgi of CALTRANS said that his agency had no objections to  the project. 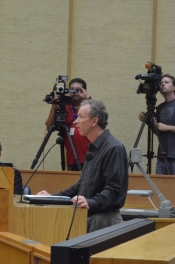 Van Collinsworth with Preserve Wild Santee spoke before the Council raising several points. He noted that the housing density of the project is four times higher than originally allowed by zoning: 430 homes versus 109.

He also argued that the homes would be too far upslope in very high fire risk zones, as well as the area burned during the last major wild fire. Chiefly, it lacks evacuation routes.

This is an auto dependent project, which goes against the City of Village planning system set in place during Mayor Jack Murphy’s administration almost 10 years ago. This system of development posits a higher density and walkable neighborhoods that are self-contained and have access to public transit.

Collinsworth told Council that “the project destroys all four Vernal pools with endangered San Diego fairy shrimp.” It will also increase the flooding out of the Sycamore Canyon pumping station, that when stressed releases raw sewage, he said. He also testified that the project will grade the Quail Canyon Creek and impact the historic Stowe Trail.

According to Collinsworth, adequate water availability has not been assessed and Padre Dam, the water utility set to provide it, has the highest water rates in the county.

Jimmy Ayala came before Council representing Pardee Homes and ask for approval. He said that many of the claims made by the opponents were just plain wrong. For example, he said that “to destroy the vernal pools would be a violation of federal law.” He said that the applicant had to work with Federal Fish and Wildlife on this, to ensure that the pools not only remain in place, but are protected. He called that “good stewardship.” 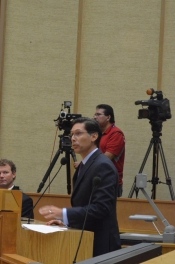 He also said that the community will be built with the latest technologies and will come pre wired for both rooftop solar, if the owner wants to do that, and Electric Vehicle hook ups. Part of “the Living Smart Program includes recycled lumber.” Pardee also would prefer if the project is annexed to Santee, significantly.

He did emphasize at several points during his 15 minute presentation that “we are preserving habitat on site.” Also that they could have gone ahead and built up to 500 homes, but they are only going to build 430.

Ayala added that Pardee has distributed information to Santee residents and claimed that the developer has overwhelming support.

In the end, Scott Sherman said, “The action at council today puts us on a path to add 90 acres of open space to Mission Trails Regional Park. I am pleased my colleagues voted to approve the Castlerock Housing Development which will be a regional asset that all San Diegans will be able to enjoy.”

After the meeting ECM talked to Collinsworth who said the next step is to “go to Santee City Council and ask them to stand up for Santee residents, say no to this project and send it back to San Diego, we can get a project that makes sense.”

Of note, Santee sent a delegate to City Council who also said that the City of Santee prefers annexation;  since they will get all the headaches, they should get the taxes.

Preserve Wild Santee is weighing a potential challenge to the Castlerock approval.  This message was posted on the group’s Facebook page after the decision:

“If you agree that the 12 Pardee campaign contributions on the same day were an inappropriate attempt to purchase Castlerock approval and wish to support the analysis and potential challenge of the SDCC approval, then send a contribution payable to "Preserve Wild Santee" to fight back…And please "Like" this page to get us over 500 Likes.”