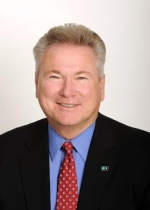 June 27, 2014 (El Cajon) - From student body president at Grossmont College during the 1960s to his fundraising efforts on behalf of students over the past 10 years, Ernest Ewin is the gift to East County’s community colleges that keeps on giving.

Now, Ewin has a new title and role with the Foundation for Grossmont & Cuyamaca Colleges that allows him to do what he does best: making personal connections.

As the foundation’s donor relations specialist, the well-known La Mesa councilman and Grossmont College alum will be cultivating major donors for the colleges and letting the business community know that by helping the colleges, they are potentially helping their bottom line.

He relishes the idea of sharing the personal success stories of students and graduates of East County’s only publicly supported colleges.

“I love the people of East County and I have a deep appreciation for the education provided at the community colleges – I see miracles performed on the campuses every day,” he said.

The1969 transfer student from Grossmont College to San Diego State University sees a lot of his younger self in the students he encounters at the two colleges.

“Like a lot of kids who leave secondary school to come to the colleges, I had no clue what I was going to do in the future – it was by attending community college that I found my path,” said Ewin, who earned his bachelor’s degree in economics and finance, then spent 30 years in banking before delving into real estate.

He returned to Grossmont College in 2004 to join the college foundation’s board of directors and took over as executive director two years later. When the foundations for the district’s two colleges merged in 2011, Ewin made the transition as the executive director of development of the Foundation for Grossmont & Cuyamaca Colleges. He also served a five-year term volunteering as chair of the college district’s citizens’ bond oversight committee for Proposition R, the $207 million facilities bond measure that dramatically modernized both campuses with high-tech buildings for learning and student services.

It is Ewin’s special affinity for East County, where he has lived since 1951, that is his strong suit when it comes to his work with the foundation, said John Valencia, associate vice chancellor of Advancement and Communications for the district and CEO of the Foundation for Grossmont & Cuyamaca Colleges.

“His years of service to the community show a genuine commitment to East County that is well-regarded and respected,” Valencia said. “As a donor relations specialist he will be dealing directly with potential supporters and will be focusing on growing the foundation and assisting the programs that serve the students.”

With additional staffing at the foundation and fewer administrative responsibilities, Ewin said he is looking forward to having more time to make the direct contacts with potential supporters.

“It takes a lot of time to develop relationships,” he said. “It requires a lot of personal follow-up and involvement.”

Ewin said his announcement this year not to seek another term in elected office after 18 years on the La Mesa City Council led many to speculate he is on the road toward retirement, but he said it was more a desire to keep his options open for future opportunities.

“Nancy and I have been married for 43 years and I am looking forward to spending more time with my family,” said the father of four and grandfather of 11, ages 6-18. “And I will stay busy engaging in a good cause in a more focused way. That’s why I am excited about his new opportunity with the foundation.”

Although four-year universities often have major endowments, community colleges have traditionally been slower to seek money from graduates and corporate leaders. Fundraising campaigns known as house parties to showcase what the colleges have to offer on departmental levels is one strategy the foundation is using to pursue major gifts to the colleges.

“I know I speak for the Governing Board when I say how grateful we are to Ernie and how delighted we are that he’s continuing with us as the perfect ambassador for the district to East County,” Chancellor Cindy L. Miles said.