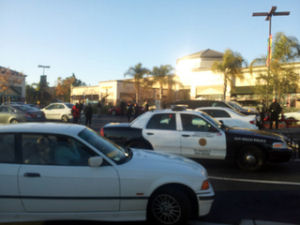 Searching the other shopping center, officers learned the suspect had entered a multi-screen movie theater.   One of the officers located the suspect sitting inside the theater, as a patron.

“As the officer approached, the officer gave the suspect verbal commands to determine if he was armed,” said Lt.. Ernie Herbert. “The suspect initially complied by raising his empty hands, but then lowered them quickly into his lap.  The suspect raised a handgun and turned it toward the officer.”

The officer shot the suspect and the suspect was taken into custody.  There were other guests inside the theater when the shooting took place and all were able to get out of the theater safely.

The preliminary investigation by detectives has revealed that the suspect and victim have been in a dating relationship.  The suspect showed up, unexpectedly, at the victim’s place of business and a physical altercation took place.  The suspect was armed with a handgun and physically attacked the victim.  The victim was able to get away from the suspect with the help of co-workers and citizens who witnessed the altercation.

The suspect, Tom Billodeaux (20) of Escondido, was shot in the arm and chest area.  He was taken to a local hospital for treatment and will be booked into County Jail as soon as he is released.  The victim was not injured during the initial domestic violence incident.

The officer involved in the shooting has been with the Department for a year and a half.