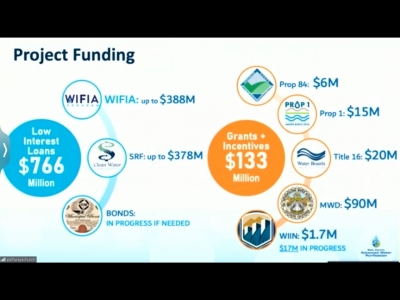 May 1, 2022 (San Diego’s East County) -- A new estimated cost for the Advanced Water Purification project, a system of recapturing sewage and transforming it to drinkable water for about 500,000 East County residents, escalated to about $850 million, an increase of more than $300 million above the estimate three years ago.

Allen Carlisle, general manager of the Padre Dam Municipal Water District, revealed the number at a public forum held April 24 in Santee, saying the project should begin construction this summer.

The project “equates to 30 percent of East County’s water supply and it’s a massive project,” Carlisle said. “This is the largest capital project in East County’s history—$850 million.”

In 2019, the water district estimated AWP to cost $528 million. Last year the cost estimate, revealed in loan documents, was $790 million.

Steve Goble, chairman of the joint powers agency overseeing AWP, blamed unprecedented global conditions and the still rising cost of many materials, particularly steel, for the much higher project estimate.

“We continue to see escalation due to limitations in raw materials, global and local supply chain, and qualified labor in addition to increased oil pricing,” Goble said.

He also noted the nation’s inflation rate on the cost for nearly everything, including all the various design, environmental, and other professional services that have been used to create plans over the past five years. 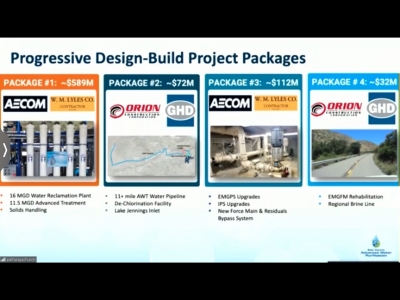 The AWP is being overseen by a joint powers agency established in 2019 by four agencies, Padre Dam, Helix Water District, the city of El Cajon and San Diego County. The original plan was for Padre Dam to build the project, but it soon became clear the size and cost required a sharing of the financing and risk.

The concept that has been used in other parts of California is taking the 13 million gallons of the region’s raw sewage now pumped daily to a Point Loma plant, and treating it at a newly built plant north of Santee Lakes. The process would push the water through an extensive system of purification, creating a near distilled product that is pumped to Lake Jennings where it’s blended and then treated again before distribution to the region’s users.

The key driver behind AWP, and other similar sewage re-use projects around Southern California, is the ever-rising cost of water that is derived from Northern California and the Colorado River, and ongoing drought that is reducing this flow. Officials say the project could provide the region with about 30 percent of its current daily supply.

The city of San Diego has been working on creating a similar re-use system called Pure Water in Miramar. The estimate for that project is up to $5 billion.

Water officials say with the project in place, price increases on water and sewage rates wouldn’t be as much. Currently, customers of Padre Dam pay some of the highest rates in the nation.

Financing for most of the AWP has been secured in the form of federal and state low-interest loans that total about $766 million. The project has also received about $133 million in grants and incentives.

If needed, AWP could tap into issuing debt in the form of revenue bonds, but it’s unclear at this point. Efforts to get an interview with Carlisle were ignored. The longtime GM of Padre Dam said at the Santee forum that he’s retiring in five weeks.

Despite the huge price hike in AWP, Goble said at the next meeting of the JPA in May, the board will likely approve a series of construction packages that put the project on course to begin building in a few months.

“Based on the current data, financial modeling and the development progress made to date, we feel there is a high likelihood the project will move forward….We are vulnerable for water shortages and must prepare as a region,” he said.