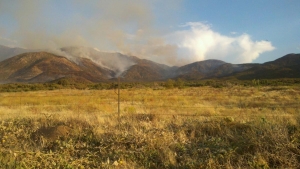 October 2, 2011 (Julian) 12:30 p.m. -- The Incident Commander in the Great Fire has ordered an evacuation advisory for about 1,100 homes via reverse 911 in the following locations in the Julian area:  Shelter Valley, Kentwood #1 and #2, Whispering Pines, Pine Crest Campground, Banner, KQ Ranch, and Harrision Park.

"This is only an advisory and the public should not panic," Cal Fire Captain Mike Mohler advised moments ago.  He advised people to "Please be prepared if asked to leave" and to not wait until the last minute to make preparations. Wynola Rd is closed from east of the Banner side to west of S-2 at Scissors Crossing, Mohler added.

The Great Fire is now 2,000 acre and 5% contained, moving in a southeast direction.  Currently there are 1,019 firefighters assigned to the fire. Cause remains under investigation.

View a video of a Cal-Fire aerial drop on the fire, taken by ECM reader Brett Stalbaum: