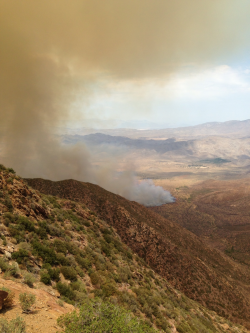 Update 4:30 p.m. -- The fire is now 2,500 acres.  An evacuation center is now open at Joan McQueen Middle School, 2001 Tavern Road in Alpine.  The fire is now just one mile from communication towers on Monument Peak, including the new KNSJ 89.1 FM station's transmitter.

Update 12:30 p.m. -- Pine Hills Cafe and Tavern has sent an email advising that there are now mandatory evacuations for the following sites:  Shrine Camp, Laguna/ElPrado Campgrounds, & Horse Heaven Campground, and for two private properties.  The town is not evacuated, however, at this time and the cafe remains open for business.

July 7, 2013 (San Diego's East County) -- The Chariot Fire, which began yesterday near the Butterfield Ranch, is now 1,700 acres, according to estimates by air attack pilots. Cal Fire officially lists the fire size at 1400 acres as of 8:45 a.m. The fire is still only 10 percent contained and could burn for days, scanner traffic indicates.

The fire is burning nine miles southeast of Julian.  Sunrise Highway on Mount Laguna  reopened briefly after yesterday's shut down, but a hard closure has again been ordered from Highway 79 to Pine Valley. Voluntary evacuations of cabins and the Shriners campground have occurred as the fire burned into the canyon below the campground.  A structure protection team has been assembled.

The fire is now under joint command of the U.S. Forest Service and Cal-Fire as it burns into Cleveland National Forest.  Firefighters have been contending with shifting winds and some have been treated for heat exhaustion. 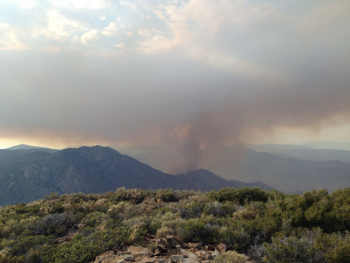 Sign up at the top right side of our homepage to receive free Viejas Wildfire & Emergency Alerts via e-mail and also receive a free weekly copy of East County Magazine. You can also follow ViejasAlerts on Twitter.

We are raising funds to put our alerts on the radio on the new KNSJ station and donations are deeply appreciated due to the very extensive time and funds needed to make this happen. You can donate at the top left side of our page.  All donations ending in .99 (99 cents) will be credited specifically to the wildfire alerts.