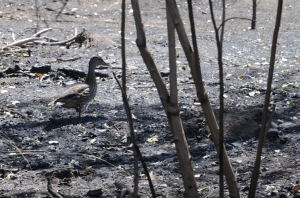 According to Santee Battalion Chief Brad Peterson only five homes were evacuated, on Willow Grove Avenue. The Sheriff’s Department conducted  this evacuation. A temporary shelter was opened at Pathways Community Church at 9626 Carlton Hills Blvd. 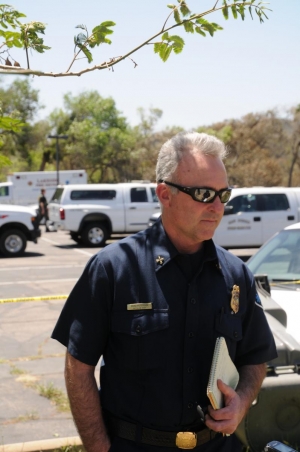 Chief Peterson (Photo, Right) said that he was not aware if residents have used the shelter and that some residents “have chosen to shelter in place.”

One firefighter was transported to a local hospital with a back injury.  There have been no civilian injuries.

“The fire is within our containment lines. The issue we have right now is these tall trees behind me,” Chief Peterson told ECM at the scene earlier today. The trees have been catching on fire from embers flying, that have been kicked up by the wind.”

Crews are on the southwest portion of the fire, and when they spot a fire starting, they fight it immediately. The fire remains at five acres, where the Chief said, “With the wind’s cooperation, we can keep it within those lines.”

This flare-up is a result of yesterday’s fire, since there are still a lot of hot spots. The area also has “a lot of heavy fuels and tall trees,” Peterson added. “The wind will stir some of those smoldering hot spots, and then get up on the trees.”

When we walked around the burn area we saw plenty of hand crews that CAL FIRE has sent. These hand crews are support received from the prison system, that allows low risk prisoners to fight fires. They also had crews from Santee, Lakeside, Heartland, San Diego, Sycuan, as far as Carlsbad on the scene. Due to the high heat, crews are getting rotated to avoid overheating. 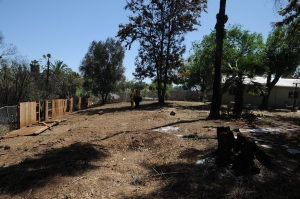 One of the homes (Photo, Left) we saw that was evacuated had very good clearance, which gave fire crews plenty of fighting space. 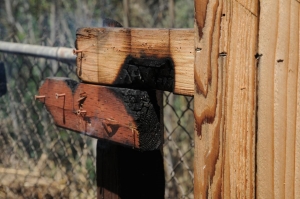 As with yesterday’s fire, damage today was limited to fences around yards (Photo, Right), along with trees.  Some damage resulted from the fire burning low and close, as well as from fire 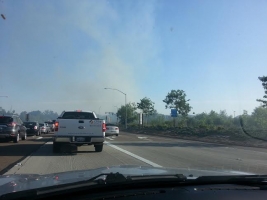 crews having to make their way to the riverbed to battle the blaze. (Photo, Left, Kate Yapjoco), Mission Gorge & SR 125.