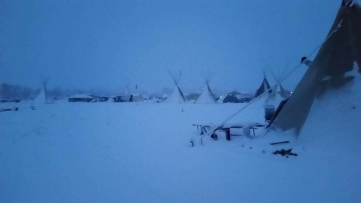 They are on historical treaty land that the Supreme Court has said was wrongly seized by the U.S.  government.  They are taking a stand against the oil pipeline that was rerouted away from Bismarck after white residents there objected due to the threat it would pose to their drinking water.  The tribes are demanding the same right to clean drinking water that their white neighbors have been granted, and fear that a pipeline rupture could contaminate the Missouri River and other waterways.

But on Friday, U.S.  Corps of Army Engineers Colonel John Henderson issued an eviction order requiring that all of the water protectors in the main camp, Oceti Sakowin Camp north of the Cannonball River, evacuate by December 5th—just one day before a coalition of 2,000 military veterans led by Wesley Clark Jr., son of the former Supreme Commander of U.S. allied forces in Europe, are set to arrive to stand with the water protectors. Some veterans have posted that in response, they are moving up their expected arrival period.

Colonel John Henderson’s written notice states that he is closing the public land managed by the Standing Rock Sioux tribe due to concern for “public safety.” A “free speech zone” farther away from sacred lands and the pipeline construction slowed for months by demonstrators will be set up south of the river, he has indicated.

But to date, the biggest threat to safety has come from brutal treatment by militarized law enforcement forces including spraying a water cannon at activists in freezing temperatures, shooting tear gas canisters, rubber bullets and a sound cannon among other weapons used.  Hundreds have been injured and dozens hospitalized.  One young woman may lose her arm and another, an eye.  The activists and witnesses say that they have remained peaceful, as many videos posted online document. Police claim that fires and propane tanks are weapons, but the tribal members say these are simply used to keep warm in winter weather.

Law enforcement has blockaded roads. Now, South Dakota’s Governor Jack Dalrymple says no forcible evictions will be made by the state, in a statement issued Saturday.  But he’s asked the federal government to provide law enforcement resources to enforce the order to vacate the land. But fines of up to $1,000 will be levied against anyone bringing supplies in to the camp, including food, shelter supplies or blankets.

Those who remain beyond December 5 will be considered trespassers, staying “at their own risk,” Colonel Henderson has warned.

South Dakota’s two Senators also want to see the protesters moved off the land. But several other members of Congress have called for investigations of police brutality by the U.S. Justice Department and have urged the Obama administration to intervene to halt or reroute the pipeline and protect the rights of the tribal members and thousands of others who have come to Standing Rock to support the water defenders.

The U.S.  Civil Rights Commission has issued a statement denouncing the “excessive use of force” by police at the site, noting that Native Americans are more apt to be killed by police than any other racial group. The Commission also called for environmental justice for the tribe, adding, “We call upon federal, state and local officials and law enforcement to work together to deescalate the situation and guarantee the safety of protesters to exercise their First Amendment Rights.”

Civil Rights Commission Chair Martin Castro added that the issue isn’t just the pipeline, but rather “it is about the entire relationship between the United States and sovereign Indian Nations, their rights, traditions and religious beliefs.”

President Obama has disappointed many by thus far refusing to take action to halt the pipeline construction or to protect the water protectors, as the activists call themselves.  But waiting for Donald Trump to take office seems an even bleaker option, since Trump own stock in the company that owns the Dakota Access Pipeline and its owner donated $100,000 to help elect Trump to the presidency, boasting to media that he is confident Trump will allow the pipeline construction to be completed.

Bobby Wallace from Barona has led caravans of relief supplies to Standing Rock. On Facebook, he posted gratitude to all who have donated supplies, money and prayers, adding that it “gives strength and hope to our brothers and sisters.” He adds, “You saw the abuse, felt the pain, but also felt the power of the good.”  On Tuesday night, demonstrators marched through the streets of San Diego in support of the Standing Rock people.

Standing Rock Sioux tribal leader Dave Archambault is adamant that the tribe won’t back down.  In a letter to Colonel Henderson at the Army Corps of Engineers, he wrote, “This decision, coming on the heels of the Thanksgiving holiday, is not only disrespectful, but continues the cycle of racism and oppression on our people and our lands throughout history.  We ask that the Corps of Engineers reconsider this decision.”

Archambault accuses Colonel Henderson of an “irresponsible threat” that could further empower the militarized police force that has been “brutalizing and terrorizing our water protectors while imposing the blame and risk on unarmed people.”

The tribal leader made clear that he will not seek to end the protests.  “I recognize and respect their rights under the Constitution of the United States to peaceably assemble in prayerful protest against the cultural and environmental atrocity that is the Dakota Access Pipeline,” he concludes. “I would not use my authority, which is based on the consent of my citizens, to curtail their human and constitutional rights.”