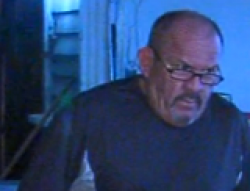 November 17, 2014 (El Cajon) – An SDG&E employee who struck a homeless man with an SDG&E pickup truck in early January, then fled the scene, has been sentenced to 180 days of house arrest and 20 days of public service by Judge Laura Halgren. Hector Hoyt also received three years probation after pleading guilty to felony hit and run.

Hoyt hit Robert Fisher, 54, on Jamacha Blvd. but did not stop or call 911. Instead, he left Fisher lying in the street at night. Fisher was subsequently hit by a second vehicle and died at the scene.

Hoyt, by contrast, attempted to hide his vehicle in the backyard and washed it, 10 News reported after speaking with Hoyt’s neighbors. Witness descriptions of the vehicle led to Hoyt’s arrest on January 22nd.

Why didn’t Hoyt stop and call for help to assist the man he hit?

He has not made a public statement, however he had previously been convicted of drunk driving back in 2005. An Attorney representing Hoyt’s family has suggested that Hoyt had been drinking at Outback Steakhouse before the fatal crash and indicated earlier this year that the family may file a lawsuit against SDG&E.

SDG&E has not commented on why it would hire a driver with a prior DUI conviction.