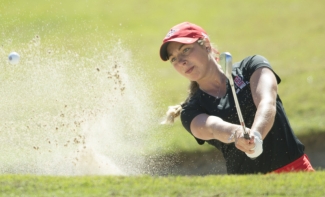 A rookie on the Symetra Tour, Henrikson made eagle on the first hole of a sudden-death playoff at the Country Club at DC Ranch, edging Swedish national teammate and UCLA alumna Louise Ridderstrom for the sectional’s lone remaining berth. Moments earlier, both players completed regulation play with a 36-hole total of 1-under-par 141, one stroke behind medalist Kyung Kim.

With twilight rapidly approaching, Henrikson reached the front of the green in two shots on the par-5, 536-yard No. 17, utilizing a driver and a 3-wood, before sinking a 20-foot putt to become the Aztecs’ first U.S. Women’s Open participant since Christine Wong in 2010.

With her dramatic finish, Henrikson will now compete among the world's elite at the 72nd U.S. Women's Open, scheduled for July 13-16, at Trump National Golf Club in Bedminster, New Jersey. The USGA has accepted 1,706 entries for the four-day tournament, which will be narrowed down to only 156 participants, including 97 players who are exempt from sectional qualifying.

In 2016, Henrikson capped off her senior campaign by becoming the first women’s golf All-American in San Diego State history, receiving honorable mention from the Women’s Golf Coaches Association (WGCA). That season, she was also named Mountain West Women’s Golfer of the Year after posting a program-record 71.96 scoring average in 27 rounds, which ranked seventh in the nation according to Golfstat.

This year marks the third USGA championship conducted at Trump National in Bedminster. The venue previously hosted the 2009 U.S. Girls’ Junior, won by Amy Anderson, who now competes on the LPGA Tour and will attempt to qualify for the U.S. Women’s Open at the Frankfort, Ill., qualifying site on June 12. In addition, the course played host to the 2009 U.S. Junior Amateur, won by 2015 U.S. Open and Masters champion Jordan Spieth.

The first two rounds of the U.S. Women's Open will be contested on July 13-14, with the top 60 players advancing for the final 36 holes, July 15-16. Last season, Brittany Lang defeated Anna Nordqvist in a three-hole aggregate playoff at CordeValle in San Martin, Calif., to win her first major championship.