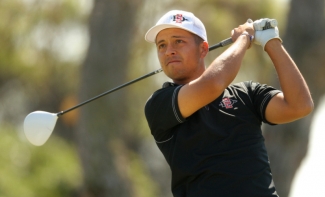 With his triumph, Schauffele collected a $3.75 million prize, including $2 million for finishing third in the FedExCup standings with 2,151 points, trailing only Thomas (3,000) and Jordan Speith (2,340). For his efforts, the Scripps Ranch High alumnus also climbed to No. 32 in the world rankings.

In addition to his birdie at No. 18, Schauffele recorded an impressive drain on the par-4, 440-yard 13th, capping a string of four straight holes with one-putts outside the 6-foot range, the first three of which saved par. Not to be outdone, he also recorded a par save at No. 17 , before landing a 347-yard tee shot on the 18th that left him an approach shot just short of the green.

Earlier this season, Schauffele tied for fifth at the U.S. Open in Erin, Wisconsin, before collecting his first career PGA Tour win with another dramatic one-shot victory at The Greenbrier Classic in White Sulphur Springs, West Virginia. Last October, he also landed in the fifth position at the Sanderson Farms Championships in Jackson, Mississippi, and tied for 11th at the Zurich Classic of New Orleans in April.

In his three years on Montezuma Mesa, Schauffele amassed 21 top-10 finishes, 16 top-five performances and two individual titles before graduating with a degree in social science. He also owns the school record with a 71.50 career scoring average in 118 rounds played, as well as the program’s single-season standard of 171 birdies set in 2014-15.