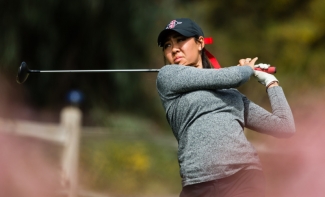 The former Aztec standout was among 952 collegiate golfers from Division I, II and III schools to receive the academic honor from the WGCA, which maintains some of the most stringent criteria in all of intercollegiate athletics for selection to the prestigious group. In order to be considered for the WGCA All-American Scholar Team, candidates are required to retain a cumulative GPA of 3.50 or higher.

With her award, Blair collected her second straight WGCA All-American Scholar certificate, marking the third year in a row that an SDSU women’s golfer has merited such distinction.

An interdisciplinary studies major, Blair garnered her fourth consecutive all-Mountain West accolade this season after leading the team with a 72.50 stroke average, which ranked second in the conference. She completed 15 rounds at or below par, including five in the 60s, and logged five top-10 placements.

Blair was the team's No. 1 golfer in five events this year, including a solo second-place effort at the season-opening Branch Law Firm/Dick McGuire Invitational, where she carded a 13-under 203 to set a school record for lowest 54-hole score. In addition, the Utah native established another program standard for 18 holes in that tournament after carding a 64 in the second round, highlighted by nine birdies.

Later in the spring opener, Blair tied for seventh at the highly competitive Northrop Grumman Regional Challenge against a stacked field that featured eight top-30 schools and was the squad's top finisher at the Meadow Intercollegiate with a solid fourth-place effort to help SDSU secure the crown.

Last month, Blair emerged victorious at two Cactus Tour events in Las Vegas, Nevada, winning by three strokes with a collective 7-under 209 at Stallion Mountain on June 8, followed by a nine-shot triumph with a combined 9-under 207 at Legacy on June 14.

San Diego State completed another successful season in 2016-17, securing its seventh NCAA regional appearance in the last eight years, before finishing with a No. 34 national ranking by Golfstat.

The Women’s Golf Coaches Association, founded in 1983, is a non-profit organization representing women’s collegiate golf coaches. The WGCA was formed to encourage the playing of college golf for women in correlation with a general objective of education and in accordance with the highest tradition of intercollegiate competition. Today, the WGCA represents over 600 coaches throughout the U.S. and is dedicated to educating, promoting and recognizing both its members and the student-athletes they represent.