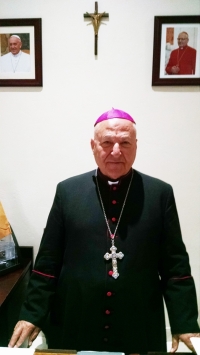 East County Magazine was granted an exclusive interview yesterday with Bishop Mar Schlemon Warduni, who has been serving as interim Bishop  and apostolic administrator of St.Peter Chaldean Catholic Diocese since May, following the retirement of Bishop Sarhad Jammo.  Bishop Warduni leaves the U.S. today to head for Rome and then Iraq, awaiting appointment of a permanent Bishop for the San Diego region.

Bishop Warduni has long served in Baghdad, Iraq under Patriarch Mar Louis Sako, and as Secretary General of the Catholic Bishops Council. He has worked to build over20 projects serving Christians in Iraq, including a church, senior citizens home, student/youth complex, homes for priests and a Bishop’s house. (Read his full biography here.)

In our interview, Bishop Warduni discussed the plight of Christians in Iraq and in refugee camps,  the challenges of keeping Chaldean culture alive,  the controversy over Father Noel Gorgis being asked to leave the diocese, and Bishop Warduni’s hopes for the future.

July 12, 2016 (El Cajon) – “Our people are suffering too much,”  Bishop Warduni said of the Chaldean Christians persecuted by ISIS [Daesh or the Islamic state]in Iraq, many of whom have fled to refugee camp. “Nobody loves them,nobody takes care of them..The children, the young people, they have no future. They finish studying and they have no job.  Always, we cry , all over the world, for those children.”

He denounced the violence perpetrated by Iraq and those who enable it. “All over the world, people are selling arms [to ISIS],” he said.  “One of the biggest problems in the world is that many nations are not cooperating…They have many interests and also, the weakness of men who want only material things, they don’t care about God who sent his son to save us.”

Bishop Warduni was the recipient of the Peace Prize in 2010 from a district governor in North Italy, as well as the Peace, Love and Freedom prize from the Saint Bona association in Pisa, Italy in2005.  Asked if he believes peace is possible in the Middle East, he replied,  “Yes, it is possible, if man thinks of God…because God is peace, God is love. He created us from peace and if you have love,  there is no war. The thought of peace in Christianity is always sacrifice for those who love Him [Christ].”

He continued,  “As you know, I am the apostolic administrator here. That means I represent the Pope himself…he speaks always of peace to do His will. Everywhere there are difficulties here on earth; only in heaven will there be no problems, for that is paradise.”

As Bishop in Iraq and briefly, San Diego, he reflects,” I told everyone I came to serve…serving is to sacrifice, and I am willing to give my life for them, there is no gift greater than to give one’s life for one you love.”

He spoke about unity of family and the need for fathers and mothers to be united with their children, children who need education and good examples provided by parents and neighbors. “If this is light, we shall see the peace,” he added.”So I have tried in these two months, I ask of everybody to do that. It depends on their trust in God.”

Asked what should be done to help refugees stuck in refugee camps or other places, those who want to come to the U.S., he replied, “For me, all the world must cooperate …because the situation for these refugees is very, very bad.  At home in Iraq, they had homes. They had jobs. But now they have almost nothing.” Between all the “rich countries”  the refugees and those displaced within Iraq could be helped, he emphasized.

“The world, I am sorry to say, is not thinking about that.”Instead, world leaders are focused on other interests. “This is a very difficult issue. Presidents, Ministries, they talk, but in reality what have they done?  Those whom made it out of Iraq [to refugee camps],they don’t even give them exit visas; some have no food.  For this I cry, I supplicate, I pray for everyone to do something.  Where are human rights?” If the United Nations cannot help with these human rights, he asks, “What is it for?  We must not be afraid. We must do whatever we can to help these children, these  girls and boys,  who are in a bad situation and in need.”

Bishop Warduni did not want to speculate on which presidential candidate  might offer a brighter future for people in Iraq or for refugees.  But he offered some points to ponder for the current or future president.  “They are best to resolve this problem. We need peace. What do we do with bread if we cannot eat in peace? The new president must think what God wants them to do.”

ECM also asked Bishop Warduni why he signed a letter ordering Father Noel Gorgis to leave the St. Peter diocese effective Friday, July 15th and seek a new church elsewhere.  Previously, Patriarch Sako had ordered Father Noel to return to Iraq, but when Father Noel and local Chaldean leaders including a former Bishop  asked that he remain here to serve the  50,000 or more Chaldean-Americans and Chaldean immigrants in our region, Pope Francis intervened to reverse the Patriarch’s order in January 2015.

“The church has canon law and we must respect one other,”Bishop Warduni said. “So Father Noel, he spoke too much against the Patriarch. When I do wrong, I must say I am sorry, no?”  Warduni said he would have supported excommunication of Father Noel, “but because this is the year of mercy, he was told to go find another church.”

He emphasized the decision was not his alone, but was made by the Congregation for Oriental Churches and Patriarch Sako. “When he was here, he also did something against me,” Bishop Warduni added, but declined to share details.”But I forgive, he was my student [in seminary]; I ask him just to write a letter of forgiveness to the Patriarch…I would take responsibility to take the letter to the Patriarch,, but he put conditions….this is not polite.”  (Editor’s note: Father Noel told us after this interview that he did write a letter of apology to the Patriarch in 2014, and showed this reporter a copy. It is unclear whether Bishop Warduni knew of that letter.)

Asked about the work Father Noel has done to help refugees and new immigrants, including his meetings with members of Congress, ambassadors  and Obama administration officials and who will carry on this work if Father Noel is sent away from the diocese, the Bishop indicated he was not aware if Father Noel had traveled to Washington D.C. for such meetings. (Father Noel has in fact taken trips to Washington, as these photos document, along with leaders of the Chaldean church and Mark Arabo, leader of a foundation helping refugees:  http://kaldaya.net/2014/News/09/12_A1_LocalNews.html.)  Bishop Warduni stated, “God takes care of His church,” and noted that the church has had many priests and bishops through the years. “Providence will guide the church,” he affirmed.

As for future plans, Bishop Warduni said he is traveling Tuesday (today) to Rome to write a report, then will go to Iraq, where he intends to invite the Patriarch to come visit the St. Peter Chaldean Catholic diocese here. “Many people told me to do that,” he said.

After his visit to Iraq, a synod will elect a new Bishop for St. Peter.”The Patriarch will come to ordain him,” he indicated, adding, “I want him to come to prepare the ground.” He indicated he wants to allay “suspicions” by some here and help the Chaldean community to heal and “sow the love, because in scripture, it says `When you sow, so you shall reap.”

He declined to speculate on names that may be on the list of prospective Bishops, but when asked what qualities he believes are most important for the new leader, he stated, “To be humble and to be patient” as well as having an ability to recognize when there are problems.”If you know the sickness, you know what to give as medicine,” he said, then added one more qualification.”Especially to have a very big heart, filled with love.”

Asked what other message he wants to convey to the public, he replied, “I want to tell people please, you also sow the peace.” For media, he asked, “When you give good and truthful news, not only report negative but also positive news. You do what you can for peace,” he said of the broader community,” even if you have to sacrifice.”

He encourages people not to sell weapons and politicians to seek peace “because sometimes we feel that nobody cares for us,” he said of Christians in the Middle East and Christian refugees.

Asked what he believes is the key to defeating ISIS, or Daesh, he responds, “Education. Wherever there is education, it must be done in this direction. Do for your neighbor whatever you want done for you. Hate is a terrible thing that can do evil, because there is no mercy,” he said, adding that those who hate are driven by self interest, not the interests of other people.

He admits that “sometimes when we are in difficulties, we feel desperation,” but adds, “We are all sons and daughters of hope..Our Lord tells us…I am with you until the end of the war.”

The struggles in Iraq are not new, despite the recent rise of ISIS, he observes.”For many years, we think things are being better, but in a few weeks we see something worse…Every day people are leaving.”

The Bishop hopes to see Christianity preserved in Iraq, where Mesopotamia is the birthplace of Christianity. For those who have come here to America, here in El Cajon,  trying to keep the Chaldean culture alive is a challenge, he says.

“Our priests, our bishops, they try to see that we don’t forget our culture, our history, our fathers, ”he says, but adds that for the young people growing up here, there is ”difficulty” in being raised in two cultures, exposed to both Iraqi Chaldean and American ways.

He drew inspiration from  a rally and vigil in El Cajon over the weekend led by Chaldeans, praying for peace. “We prayed not only for Iraq but for those police officers killed in Dallas,” he concluded.  “I saw,  I would say, 2,000 people were there; I t was beautiful.”