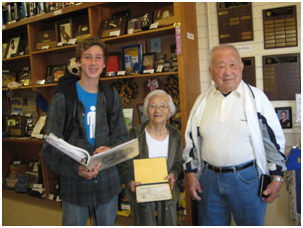 Chisato Iversen:  How did you feel once you knew that you were going to be put into an internment camp?

Grace Tsuida: I was young and yet sort of felt for my parents when we had to go to an Internment camp.We really didn't know what we were getting into until we got there. Once there we had to adjust ourselves like all the others as we weren't the only ones and tried to make the best of our life there....

Chisato:   How old were you when this happened?

Grace Tsuida:  I was 15 years old when this took place..I have two older brothers and two older sisters.One was married and had three children. Therefore taking care of the folks and getting rid of the various equipments they had my two brother and one sister not married were able to take care of that for the folks. They are eleven, ten, nine and eight years older me so I was very fortunate as I wasn't the oldest..I was the youngest..

Chisato: What was the lifestyle in the internment camp like?

Grace Tsuida: Camp life was all community style..We had mess halls, showers, rest rooms, ( No ) doors all open spaces and laundry rooms, Really no privacy in all the community rooms.If you went for an shower in the evenings there would be ladies for the water to get hot as the ladies who went to shower earlier had used all the hot water...So myself, I used to take it later in the afternoon when there was plenty of hot water...

Chisato:  Was it hard to adjust to?

Grace: It was hard to adjust at first as we all have our own style of living and with various people together there you had to go your way. Everyone had their own way of living and doing things before camp so we all had to adjust to each other's way and visa versa.. We met so many different types of people...

Chisato: What do you think was the hardest part of living in internment camps?

Grace: To me not being able to go out shopping and browsing around was hard at first .Even going to grocery shopping and seeing different things on the outside of camp..We didn't know what was happening and going along with our life there...Sears Roebuck and Montgomery Wards was everyone's shopping stores while in camp..We could order things from those 2 stores and have it delivered to us at the camp..

Chisato:  How did you feel once they let you go back home?

Grace: I was in Chicago with my brothers and one sister part of the war time.They let us go mid-west or East Coast..We couldn't come to the West coast..This was after we were in camp for a while they said we could go Midwest or East coast..

Therefore my two brothers and one sister and I went to Chicago. War was still going on and jobs were available as the young boys were being drafted and jobs were plentiful there...We left our folks in camp along with our married sister and her hubby and 4 children as she had her fourth child while we were in camp.. Many of us left our folks and went to work wherever we were..When the war ended, my folks and sister and her family wanted to come back to San Diego and go farming as that was what they were doing when the war came along.

So my oldest brother came to SD to get things settled so the folks and our sister and her family could get back home again..We had our home and our sister did too as she was married already and the houses were rented out while we were gone and my brother took care of all of that, and so the folks had a place to come back to and my married sister also..

Chisato:  Was it hard for you and your family to be accepted once they were back home?

Grace:  No, actually none of us had a hard time when we all came back..In fact many were very gracious and sorry what had happened to us doing the war days.

Chisato: Did you still have all your properties and were your parents able to  find a new job?

Grace:  Yes, our folks home and our sisters home was fine and they had to get all the  farming equipment which my older brother had to do so our folks could get back to farming and him too.In the meantime my two brothers and one sister all got married and my brothers got back to farming with our folks.The one sister stayed in Chicago and got married there and stayed there and had her family and didn't come back to SD..

However.. My two brothers and their wives are gone and my sister in Chicago is gone also and they have left me here with all their children, grandchildren and etc. and I am the only aunt on our side of the family with them.The sister who went to camp with us is gone but their children are here too and all of them are respect this aunt they have here yet. My nieces have cousins get together and include me to all their parties and whatever they have...

.I am 90 and my husband is 96 and we are very fortunate health wise..Both of us are able to get around on our own yet with no canes, walker and etc..No major health problem and feel so fortunate that we are here yet..We have one son and one daughter in SD with us.We lost our oldest son to kidney cancer 19 years ago and he left us with two ( have to brag ) granddaughters who are so good to us want to do things for us all the time...Our second son also has 2 girls for us who are little younger than the other two granddaughters.Have one daughter with no children but her husband and her take such good care of us too.They are both retired and living close by and drive to any event or doings for us.Her husband is a native of D.C., born and raised there and was so willing to come here to retire and look after us...He doesn't have any folks and has older brother in D.C. We are so grateful to him.

Also read our story,Parallels from the past: Exhibit on local Japanese-American students interned duringWWII evokes fears "it could happen again," historian warns: http://www.eastcountymagazine.org/parallels-past-exhibit-internment-loca...

But it was LONG after their release, in 1988. This is one sordid chapter of many in US racist history.

Thank you for sharing your story Grace.
I knew two Japanese families in Lemon Grove and the parents were of the age that they were likely in one of the camps. I searched the names of those who were at Manzanar and didn't see a Takanashi or Nakano listed. Such a desolate place. People were sent to Arizona too.