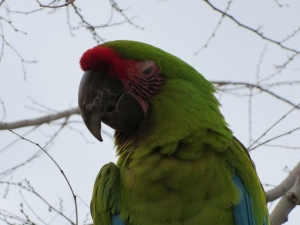 January 16, 2015 (El Cajon)--On Monday morning, I was out for my daily morning walk. It was cloudy, cool, and a little gloomy. I was zoned out listening to some music on my iPod Touch, yet as always, keeping an eye out for a photo opportunity. Passing by Prescott Promenade Park (229 East Main Street, El Cajon), this writer noticed four birds in a tree which were definitely ‘non native’ to the area. In fact, the birds include parrots, a cockatoo and a macaw. 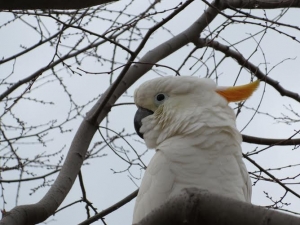 I thought, “Wow”! What the…”? So I looked around to see if there was someone tending them. How odd, no one. Yet wait, there was a person sitting in a van close to the park. Hesitating just a moment, I approached the older gentleman and as he noticed me politely standing there he opened the door, I asked him, “Are those your birds?” He replied “Yes.” I asked if I could take some pictures, he again replied, “yes”. 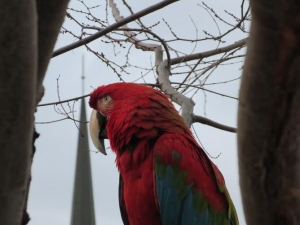 So I thanked him and proceeded to do so, and here are some of the results. I did not get his name, nor did I do an interview to find out details about the parrot’s day in the park, because he seemed to be enjoying a quiet moment of his own and I did not wish to interrupt that - perhaps next time…

Editor’s note: In addition to these birds, Prescott Promenade Park has also recently begun to host a very large flock of wild parrots. Another of our writers witnessed several hundred green red-headed parrots alighting in trees around the park as well as near the courthouse and city hall across the street. So if you think this park is for the birds, you’re right!