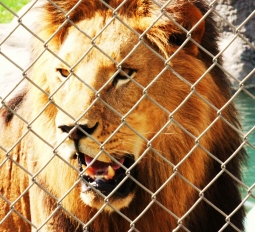 October 19, 2010 (Alpine)--Roaming around the perimeter of Tiger Trails, Bakari watched the arrival of new faces through his piercing yellow eyes and welcomed visitors to the Lions, Tigers and Bears ranch in Alpine for a day of exotic escapades. It was a warm, sunny afternoon on Oct. 16 and the African lions, Bakari, Jillian and Suri lounged on the grass, enjoying the refreshing, cool water from their pool as guests sipped champagne, observing the cats in awe.

Bakari and his sisters were brought to Lions, Tigers and Bears at the age of four weeks from an overcrowded big cat sanctuary in Louisiana. Named after the African expression, “one with great promise,” three-year-old Bakari is certainly the king of the ranch, already living up to his name with an intimidating stature of nearly 600 pounds, a voluminous mane of dark golden locks and beautiful distinctive markings. 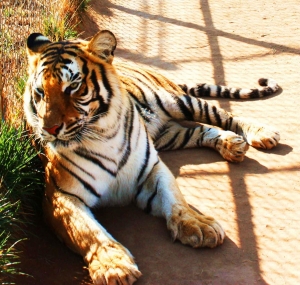 These lions share a 93 acre home with their neighbors: a family of Bengal tigers, a leopard, an African serval, three bobcats, a mountain lion, a North American black bear and a variety of farm animals. Founder and director of LTB Bobbi Brink began welcoming these animals into her family in 2003 when she and her husband, Mark, developed the “federally and state licensed nonprofit rescue facility dedicated to providing a safe haven for unwanted and abused exotic cats.”

LTB hosted Exotic Escapades with the support of the San Diego American Association of Zoo Keepers. “This is actually our first pairing with LTB,” Vice President of the San Diego AAZK, Matthew Akel, said. “Typically we’ll do different types of fundraisers, this is a unique one for us.”

Founded in 1967, AAZK is an “organization that promotes professionalism in zoo keeping through education in the most modern and current techniques in animal management.” AAZK is featuring an upcoming photo contest and will be hosting the 2011 National AAZK Conference from Aug. 24 to 28 in downtown San Diego. 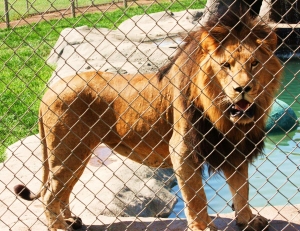 “People from around the U.S. and the world will come in and share their ideas and the techniques that they’ve used, and then they could take it back to their facility and share that with their coworkers,” Akel said. “But it’s open to anybody.”

Upon entering the ranch, guests were greeted by LTB volunteers and AAZK representatives and welcomed to wine and food tasting as well as a silent auction. An exhibit of LTB souvenirs, jewelry and cheese was displayed for guests to purchase. Nearby, Doug and Carol Dubé offered samplings of their handcrafted East County wine from Dubé Vineyards to wine enthusiasts.

In addition to luxurious hors d’oeuvres and drinks, Exotic Escapades featured live entertainment all afternoon. Known as a music lover, Conrad, the mountain lion, paced in his enclosure to the smooth and rhythmic sounds of acoustic Latin American music played by local musician, Lorenzo Kemp, while guests sipped on wine and visited the cats.

VIP guests were invited to feed the cats prior to the start of the event. This special treat is also available to people with prestigious LTB memberships. Membership levels range from Cub to King of the Jungle and all levels offer a variety 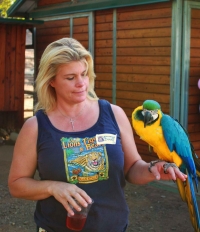 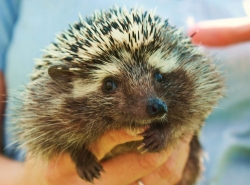 At 3 p.m. Conga, the leopard, watched the fluid whirling of the Flamenco dancers’ bright dresses as he lay idly on his comfortable hammock, mesmerized with amusement. Behind the dancers’ stage, Gizmo, the bobcat, took a little cat nap while his roommate, Tuffy th 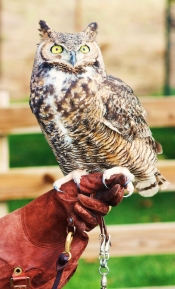 In the next enclosure, Raja played with his daughter, Sitarra. Sitarra and her sister, Tabu, were both raised by Raja, Natasha and loving LTB volunteers. This family of friendly Bengal tigers loves to play in the water, eat all kinds of foods and have mastered several training commands. Natasha was already pregnant with the girls when she arrived at LTB. Having grown up in the confines of a 6 feet by 12 feet cage with no shade or shelter from the scorching Texas heat, Raja and Natasha now have the opportunity to run and play in Tiger Trails and to be nurtured by caring volunteers. 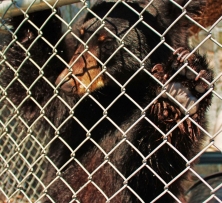 All of the rescued animals brought to LTB are offered a lifetime home. The newest addition to the family is Liberty, the black bear. Liberty moved into the ranch on July 4, hence her given name, and has grown to be very playful and friendly with the LTB family. When given some fish for her meal, Liberty ate the first few fish, then bit off the head of the last fish and nudged the remainder to volunteer Susan Burchett, exhibiting her uncanny love for sharing.

“It was really urgent the weekend we had to take her,” Burchett said. “It was take her or she’s going to be put to sleep.”

At the approximate age of 18 months, Liberty is already more than 112 pounds and is expected to double in weight very soon. She is temporarily residing in a quarantine cage until an enclosure can be built for her to stay in. Brink says she expects the project to be completed by February or March and will hopefully be home to more bears in the future.

LTB could not provide the quality of life that they do without the generous donation of supportive community members and animal lovers. The organization is always open to new volunteers and continuously putting forth efforts to hold fundraisers.

When asked how donations are spent Brink said, “On all of our operating costs. So we’re entirely run by volunteers. We just have two employees, Martine and Christie. The funds go to the facility, the animals’ food, the insurance, utilities, veterinary care, maintenance, habitats, grounds, whatever makes their lives better.”

Community members can help the LTB family by making donations, becoming LTB members, sponsoring an event, adopting an LTB resident or spreading the word about the organization’s mission. 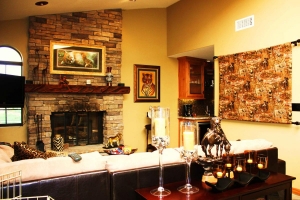 Animal lovers may also participate in White Oak Wild Nights. LTB’s ideal getaway retreat with four star accommodations is available all year round. Guests can spend their vacation in the company of their favorite furry family members. 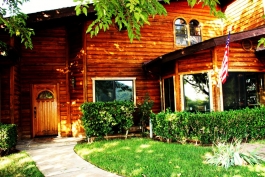 LTB will be hosting a spooky campout on Oct. 29 where guests can barbeque, share s’mores, and swap ghost stories with keepers while the furry felines provide a majestic soundtrack of wild sounds. Bakari is already drooling with excitement over the roaring good time he will have on Halloween weekend.

For more information about Lions, Tigers and Bears, visit www.lionstigersandbears.org.