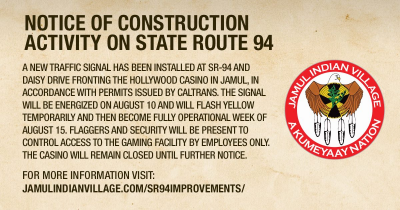 The signal will flash all yellow beginning Wednesday to alert motorists about the change. The signal will be fully activated to “red-yellow-green” phasing the week of Aug. 15.

Work will continue on the intersection for signing and striping. Motorists are advised to look for changeable message signs and traffic flaggers to provide guidance through the area. Speed in the construction zone has been reduced to 45 MPH. The work is privately funded as part of the Jamul Indian Village Access Improvement Project on SR-94.

The Deerhorn Valley Antler reports that residents who called Cal Trans were told the events are part of a week-long grand opening for the Hollywood Casino Jamul-San Diego.  However the Jamul Indian Village, where the new casino is located, has not yet responded to ECM’s request for confirmation on the grand opening date. A notice on the Casino’s Facebook page states that “the casino will remain closed until further notice” while the new signal light is installed.

Opponents of the casino have voiced concerns that a temporary liquor license has been issued for the casino’s upcoming opening. Over 1,000 letters to the state’s Alcoholic Beverage Control Board had requested that no liquor permit be issued, according to the Jamul Action Committee, an anti-casino citizens group.

Janet Mulder,in a letter to Jennifer Hill at theABC in San Diego, asked why Jamul was granted the alcohol permit when other tribal casinos such as Sycuan and Barona were required to wait a period of time after opening to allow for assessment of traffic impacts before a liquor license was granted.

“It is extremely important to note that the 10 mile stretch of SR 94 from Rancho San Diego to Otay Lakes Road has 5 ½ times the average number of traffic fatalities compared to the County’s average,”Mulder’s letter states. She also contends that the alcohol permit was issued before improvements to SR-94  required for mitigation of casino impacts have been completed. The announced traffic delays are set to occur just a week Steele Canyon High School begins fall session, leading some to voice concerns over teen drivers on the highway.  Some commuters from as far away as Potrero have contacted  ECM to voice concerns over a slowdown of already lengthy commutes.

“JIV is very grateful to Governor Brown for making this agreement possible.  The compact creates an economic environment that allows the Tribe to transition to self-sufficiency and to contribute to other Tribes, the community and local government,” said Jamul Indian Village Chairwoman Erica Pinto. “The compact also provides incentives that will allow the Tribe to continue to partner with and invest in the local community.  “Through this compact, JIV reaffirms its commitment to working with the County on fire service, law enforcement and road improvements,” Chairwoman Pinto added in a press statement on the compact.

Since when did the community of Jamul express a desire to partner with JIV? NEVER. Nothing could ever say "Jamul" less than "Hollywood". Disgusting. Jamul does not want or need your partnership, nor do any of the other tribes that already have casinos. The only road improvements are those directly impacting the monstrosity that was crammed onto 4 acres. There sorely needs to be passing lanes from Rancho SD out to Tecate. THAT would be an "improvement", not a traffic light and more heavy traffic. The slow truck traffic and now the gridlock that will be created by people anxious to give their money away will create a nightmare. Ever been to the intersection of Willow rd at high traffic hours? 2 not 1 CHP's to direct traffic. Explain how Wildlife and habitat are protected by putting in a casino that will add thousands on the road to hit and kill them? Habitat? Garish lights, soil nails, visual destruction? Make no mistake Ms. Pinto (who lives in a high end area of Alpine, not on your precious "Reservation"), your Casino is NOT welcome here.
Expect a lot more delay and more traffic accidents on 94 when the casino opens. Those of us who live in in and around Jamul are already seeing increased traffic on feeder roads off the highway and it's only going to get worse. Expect more accidents due to drunk drivers coming out of the casino at all hours, as well. All in all, it's a no win for everyone, except the indians.
Electric signage very early yesterday morning showed the traffic caution for 8/22 - 8/29.