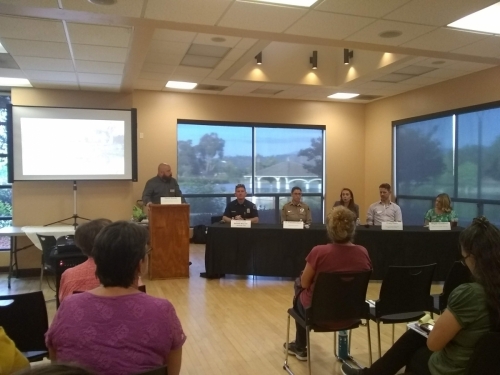 June 4, 2019 (Lakeside) -- Lakeside has a good reputation as a relatively safe area, but like every area of the county, it’s got some crime and could be made even safer if citizens make an effort and speak out when they see problems.

That was the key message imparted by a panel of experts speaking May 29 at the Lakeside Community Center organized by the Institute for Public Strategies.

“It goes back to the saying, ‘If you see something then say something,’” said Lt. Fran Passalacaqua, who has headed up the Sheriff’s Department Substation in Lakeside for the past 14 months.

Passalacaqua said the biggest problems reported to her station are calls that involve narcotics and homeless. The former range from underage young people indulging in marijuana that’s now legal for adults to the sale of illegal hard drugs such as heroin, methamphetamine, fentanyl, and pills.

Homelessness isn’t a crime, but people who are sleeping on private property and causing a nuisance, such as building fires and camping, can be prosecuted. Yet that requires the owner notifying the Sheriff’s station about the problem, she said.

Monique Myers, an attorney with the county’s District Attorney’s Office, said that many homeless people are probably breaking laws involving trespassing, but because of a federal appeals court ruling last year, it’s less likely that they will be arrested on that charge.

The ruling stated that law enforcement officers cannot charge people with the crime of trespass or encroaching the public right of way unless there is an adequate number of beds at shelters to house them, Myers said.

“Without having those beds, the Sheriff’s Department won’t be arresting that person,” she said.

Even when people are charged with lessor crimes related to their homeless situations, the fact is that even those convicted likely won’t be serving long sentences-- and that isn’t the best way to change their behaviors, Myers said.

What’s needed is a multifaceted approach that involves a variety of strategies but includes creating crisis centers aimed at helping people with mental health issues and hiring trained workers to staff those centers, she said.

Myers said her office spends a great deal of time, funds, and effort doing outreach to all sorts of groups about what citizens can do to prevent crimes. That includes going to schools and talking to younger children about the dangers of human trafficking.

While some may feel broaching the topic with elementary school-age children is too much, the fact is most of them are already well aware of this evil through commonly known fairy tales, Myers said. “It’s not done in a scary way, and most are well aware of the stories they’ve heard,” she said. “Take Cinderella. That’s labor trafficking.”

San Diego County is the 13th largest metropolitan area in the nation when it comes to crimes associated with human trafficking, Myers said.

To counter a growing level of low-level misdemeanors that can often put young people in a life of crime, San Diego County has established a division of collaborative courts aimed at steering non-violent offenders into programs to change negative behaviors. Among these courts are those geared to veterans, the homeless, and certain drug users.

The idea is to give first-time offenders a chance to get involved in a rehab program, complete it, and eventually get the charges dismissed. But if a violator breaks the law a second time, this option isn’t provided, Myers said.

Another county program aimed at reducing alcohol abuse, particularly among younger adults, is the Binge and Underage Drinking Initiative. Craig Reed, a program manager for the Initiative, said the goal is to reduce the amount of drinking by those less than 21 years old, as well as putting pressure on liquor stores that may be selling alcohol to younger people.

Chief Bernie Molloy of the Lakeside Fire Protection District said that his crew depends on community residents quickly calling them whenever they see any fires. With the Fourth of July approaching, he noted that fireworks set off near dried vegetation can easily spark a major wildfire. “Any spark is a dangerous spark in our community,” Molloy added.

Chief Molloy said the average response time for ambulances his agency controls is nine minutes, 50 seconds, but for the immediate Lakeside area the response time usually ranges from five to six minutes. His district has mutual aid agreements with other fire agencies so they can send a lot of resources to a scene fairly quickly, he said.

Asked what could be done about a recent spate of billboards and other public advertisements about now legalized marijuana, several panelist suggested contacting the companies and asking that such ads aren’t posted in close proximity to schools.

Myers said even a better solution is to advocate and support new laws that would restrict how such ads are permitted. The idea is to place limitations on marijuana purveyors much in the same way that there are restrictions on promoting the sale of tobacco.

The event organizer, Institute for Public Strategies, is a nonprofit group that has been a contractor with the county’s Health and Human Services Department since the 1990s, said IPS spokesman Paul Levikow.

The meeting drew 46 people, which is considered a good turnout for such events, he said.

Another similar meeting on safety and security issues is scheduled for June 18 at 6 p.m. at the same site, the Lakeside Community Center, next to the Lakeside Library.