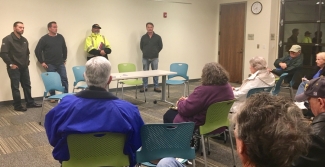 December 19, 2018 (Alpine) -- A raging thunderstorm overhead added emphasis to the importance of having a backup electrical source during a free public forum at the Alpine Library.

Four experts provided information to homeowners and others during the Dec. 6 session, hosted by the library at 1752 Alpine Blvd.

Mary Davis of Alpine was among those who found the hour-long seminar useful. “My Mom is in Crown Hills and they’re on the first (San Diego Gas & Electric Co.) circuit to get cut off in an emergency,” Davis said. “We wanted to get options for her. We wanted to get a generator for her.”

During the discussion about generators, solar power, safety, liability, converters, systems, batteries and more there were sobering warnings.

“If you have a portable generator, be sure you unplug the appliance and then plug it into the generator,” Abeyta said. “Plugging the generator into the whole house will back feed the utility grid and injure an SDG&E employee.”

Mauldin pointed out that there are plenty of backup options. “Before settling on a battery, generator or whatever, look at your options and shop around,” he said.

Zenor noted that whenever severe weather, earthquakes, high winds, fires and other major situations happen “a permanent standby generator is often viewed as the best option because it provides automatic options during extended outages.” “KOHLER Standby Generators are fully automatic and permanently installed outside with a direct connection to the home’s electrical system,” he said.

Edwords, an Alpine Mountain Empire Chamber of Commerce Ambassador, said an ideal fuel for backup generators is propane “because it doesn’t deteriorate with time.” “The modern-day gasoline goes bad in about three months and it can damage your equipment,” he said.