Update 10 p.m.  The fire is now 4,234 acres and 5% contained.  The fire continues to threaten the communities of Barrett, Potrero, and Tecate.  Multiple agencies are on scnee fighting fire and protecting structures through the night.

Update 9 p.m.:  An ECM reporter on scene tonight reports "explosive" fire behavior.  A second ECM reporter on scene witnessed electrical equipment explode. The fire is burning near State Routes 188 and 94, heading north. Scanner traffic indicates several homes burned and two civilians suffered burn injuries; a firefighter had a minor heat-related injury.  If you are in the path of this fire, do not wait -- get out now.  The Border Patrol is assisting the Sheriff Dept. with evacuations.

Update 8 p.m. : All schools in the Mountain Empire School District will be closed tomorrow due to the fire. 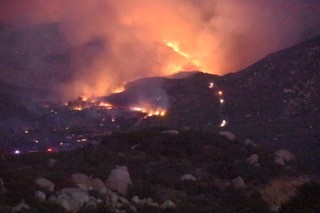 August 31, 2022 (San Diego’s East County)—The #BorderFire32 has swelled to 1,600 acres since starting this afternoon near State Route 94 and Barrett Lake Road near Dulzura.

The fire is burning eastward, with zero containment, and has crossed State Route 94 on the eastern portion of the fire.  Structures are threatened, at least one has burned, and more than 400 homes have been ordered to evacuate tonight  as the fire burns at a critical speed. Mandatory evacuation areas include much of Potrero, Barrett Junction, Dulzura and Tecate.

State Route 94 is closed all the way from Otay Lakes Rd. in Dulzura to Forrest Gate Rd. in Campo.  The Tecate border crossing is also shut down.

Current evacuation centers are set up at:

Pets can be taken to the San Diego Humane Society, 5821 Sweetwater Rd. in Bonita.

Need help to evacuate pets? Call the Dept. of Animal Services at 619-236-2341. Messsages will be relayed to their Emergency Response Team stationed nearby.

Here is the latest evacuation map as of 7 p.m. 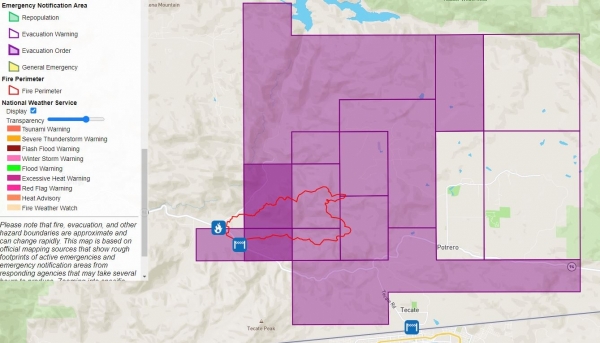 The fire has been burning eastward however an eyewitness in Potrero indicates the winds have shifted and the fire is heading toward Coyote Holler, which is among the areas being evacuated.

Air tankers, helicopters and ground crews from many districts are on scene, however a very large air tanker has been diverted to Los Angeles, where a major fire is also burning. 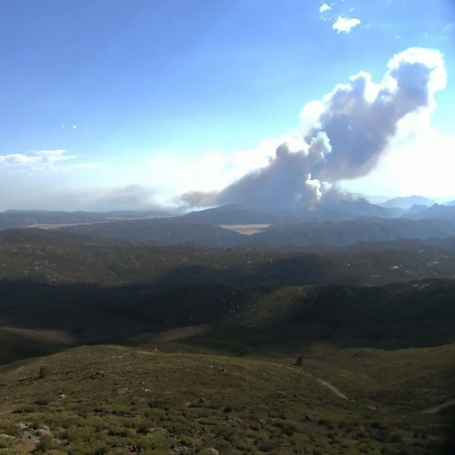