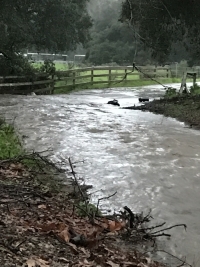 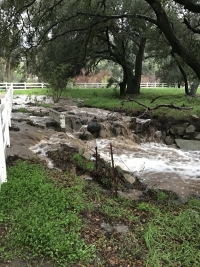 Photos by Christina Dahners-Johnson:  Seasonal creek behind Lyons Valley Trading Post in Jamul had been dry for at least seven years before this storm.

February 27, 2017 (San Diego) – Flooding is wreaking havoc on rural roads and highways countywide.  In Mission Valley, the San Diego River has water cresting among the top 10 levels on record, with the ballfield at Petco Park and some parking garages currently submerged.

George Barnett, a member of the Alpine Community Planning Group, posted in the Ranter’s Roost forum, “ It’s raining like hell in Alpine…Viejas Creek is way outside   its normal channel and Via Viejas into the old ranch area is closed with the dam well over-flowing.  To my eye, on a dark and cloudy day, more water is coming down the creek than I recall seeing in maybe 10 years.”

Otay Lakes Road is closed at Pio Pico due to flooding.  The Deerhorn Valley Antler reports that a car-sized boulder is beginning to slide down on the west side of Honey Springs Road north of Hradekey’s tractor. Boulders are blocking Skyline Truck Trail at Lawson Valley Road.  Lyons Valley Road, Deerhorn Valley Road and other roads in the Jamul area are also reported flooded.

Christina Dahners-Johnson sent photos to ECM (shown at the top of our story) with this note. “These photos are of a seasonal Creek behind the Lyons Valley Trading Post in Jamul. It hasn't seen any water for at least seven years.”

Several inches of rain have fallen in some parts of the county. Flooding earlier this evening blocked traffic on Wildcat Canyon Road in Lakeside.

The County’s office of emergency services advises, “Flooding is especially dangerous at night and during commute hours. The water is deeper and moving faster than it appears. Do not drive vehicles through flooded roadways – Turn Around Don’t Drown.”

The Department of Environmental Health has issued a General Advisory for coastal waters of San Diego County due to recent rainfall. Swimmers, surfers, and other ocean users are warned that levels of bacteria can rise significantly in ocean and bay waters, especially near storm drains, creeks, rivers, and lagoon outlets that discharge urban runoff. Urban runoff may contain large amounts of bacteria. Activities such as swimming, surfing and diving should be avoided in all coastal waters for 72 hours following rain. For updates on beach closures visit www.SDBeachInfocom or call the 24-hour hotline at (619)338-2073.

Additionally, a massive sewage spill has caused a water contact closure for the ocean shoreline at Tijuana Slough National Wildlife Refuge shoreline north to include all of Imperial Beach due to sewage-contaminated flows from the Tijuana River entering the United States. Access to Friendship Park at the border may also be impacted.