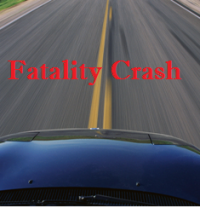 February 20, 2012 (El Cajon) -- Paul Kruze, a freelance photojournalist whose works have appeared in ECM, was at the scene of last night's fatality hit-and-run accident in El Cajon. He offers new details which suggest that the victim was jaywalking and died on impact.

"I was just getting gas at the ARCO on Avocado," he told ECM.  According to Kruze, the pedestrian was crossing Avocado considerably north of Chase -- not at the intersection.  The victim "clearly had been jaywalking, and it was really dark and raining," he said, adding that the victim wore a light-colored hoodie but visibility was poor.

Kruze stated that the victim sustained a severe head injury and that due to the obvious damage, the individual died immediately.

"A lot of people were stopped," said Kruze, adding that some had cell phones and were summoning emergency authorities promplty.

The driver left the scene, which is illegal in California.  El Cajon Police issued a plea for public help to identify the driver.  A short time later, the driver called police from home with help from a translator to report the accident.