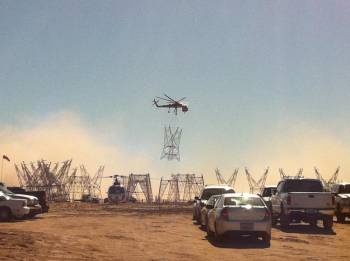 According to the updated report, a new air crane has been provided by the manufacturer, Erickson. The new helicopter has undergone test  transporting and lifting heavy loads, and has now been approved to resume construction activities in East County.

The two incidents occurred June 7 and June 10 in Imperial County, though the massive air crane is also utilized on Powerlink Construction in San Diego's East County.

The revised report faults a hook system for releasing prematurely. The replacement helicopter is a 64-F model air crane similar to the one previously used by SDG&E, but has an older lower hook release system than the prior helicopter. “This particular helicopter has conducted over 280,000 lifts,” the CPUC revised report states.

The Federal Aviation Administration (FAA) has also approved Congested Area Plans (CAPs) submitted by SDG&E following the incidents and reviewed a copy of the flight test plan to validate the cargo hook on the replacement aircraft N158AC. FAA inspectors observed the tests and approved resumption of operational lifts.

The CAPs require, an additional to adherence to federal aviation regulations and CAPs, that SDG&E hold an on-site safety meeting prior to lifts. SDG&E has added a new safety position, the CPUC reports. Traffic control permits and safety measures are also to be implemented to ensure public safety on traveled routes during lift operations.

In response to regulatory inquiries, SDG&E also submitted documentation that the eight pilots have each logged total flight hours ranging from 3,250 to 31,485.