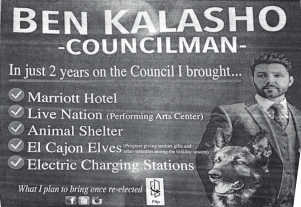 August 31, 2018 (El Cajon) – On his campaign literature, El Cajon Councilman Ben Kalasho has made some inflated claims about his record. Here’s how the facts compare to the claims.

“In just 2 years on the Council I brought… 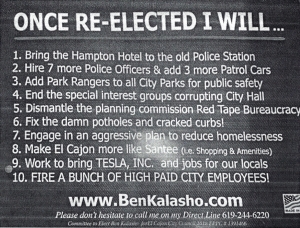 Claim:  Kalasho also promised that if reelected, he will “bring the Hampton Hotel to the old police station.”

Claim: Kalasho also makes broad promises of other things he says he will do if reelected, such as hiring seven more police officers, adding three more patrol cars, and park rangers for all city parks.

Fact:  It is unclear how he would fund these promises, particularly since he also calls for lowering sales tax.  Perhaps he hopes to raise revenues by making el Cajon “more like Santee (i.e. shopping and amenities).” It’s too early to tell whether any of these claims could become reality.

Claim: He also broadly promises to “bring in companies such as Tesla, Intel and Apple to our city” to hire locals, but provides no details on what incentives he has in mind to interest such major tech companies in El Cajon. We put this in the category of wishful thinking – don’t we all wish this one could be true?

Claim: He also states he would “fire a bunch of high paid city employees.”

Fact: Hiring and firing of most employees is not done by the city council and some workers are protected by union contracts.  Kalasho could potentially make an argument to fire or replace a non-protected worker but could not do so unilaterally.

Claim: His platform calls for introducing a plan to help the homeless by getting them city jobs such as cleaning graffiti.

Fact: While this could happen, he provided no specifics on how he would accomplish this.

Fact:  Ironically, Kalasho’s Middle Eastern Chamber of Commerce took a four-figure payment from Waste Management and Kalasho failed to recuse himself from a City Council vote on trash hauling fees involving Waste Management. As a result, the city had to issue new notices to all residents involved at considerable city expense and held a new vote with Kalasho recusing himself due to his conflict of interest.

Claim:  He claims his Chamber created “hundreds of local jobs.”

Fact: Kalasho provides no substantiation of any jobs created. While it’s likely that support of small businesses may have helped some create jobs, recent controversies cast doubt on the Chamber’s current effectiveness. His Chamber, formerly the San Diego East County Chaldean Chamber of Commerce, was forced to change its name after a court finding that Kalasho violated another organization’s trademark.  A civil case currently pending includes evidence deemed admissible and true by a judge that Kalasho and his wife, co-owners of the privately-owned Chamber, comingled their personal assets with the Chamber’s assets and with assets of the pageant.

A bench warrant for the arrest of Kalasho’s wife, Jessica, was issued today in San Diego Superior Court after she failed to show up at a debtor’s exam to answer questions after the couple was accused by attorney Jimmie Parker of hiding substantial assets in anticipation of a possible civil judgment against them.

Kalasho himself has been a lightning rod of criticism recently with numerous citizens calling for his resignation at recent Council meetings.  He recently left the Democratic Party and is registered with no party affiliation after drawing heavy criticism from people in both Democratic and Republican Parties over a civil case alleging that he engaged in sexual harassment of young women in his beauty pageant and fraudulently took out fake identities on social media to harass and defame a local businessman, an attorney and two beauty contestants.  He pled guilty to two counts of workers’ compensation fraud in 2016 and remains on probation until October 1, 2018.

With Kalasho’s long history of lawlessness, is it any wonder he is a liar as well? The fact is, as a council member, he lacks even a modicum of success. He is known throughout the city as a loser, proof of this can be found with a cursory glance at his Twitter account wherein on May 30 he said he will be announcing his campaign on June 10. That was over 3 months ago and to date that comment has but ONE Like and that was probably his wife. This from a man who boasted of his number of Twitter followers. https://i.imgur.com/QOQKqrB.png Bessmon needs to be recalled but he needs to be in jail even more.
Bad girl Bad girl Whatcha want, watcha want Whatcha gonna do When sheriff Gore come for you