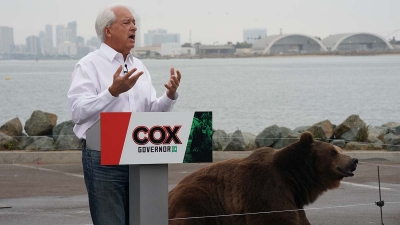 Photo:  John Cox showed off Tag the bear on Harbor Island during his campaign. Photo by Chris Stone

That holds true for politicians, including the candidates in California’s Sept. 14 recall election and Gov. Gavin Newsom. Campaigning during a resurgent COVID-19 pandemic and deadly, unprecedented wildfires, their approaches to the state’s problems can vary.

But the facts behind some of those issues don’t change. We look at some of the claims being made on the campaign trail and how they match up with reality:

that the right only knows how to lie and stretch the truth. these people do not care for anyone but themselves.