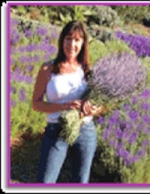 October 23, 2011 (Valley Center) -- Celebrate the joy of the season on Friday, October 28  or Saturday,October 29 from 2-4 p.m. at Keys Creek Lavender Farm.  English high teas have become among the most popular events served at  the farm, which serves up a tempting array of teas and delicacies.
Keys Creek Lavender Farm is nestled in a serene valley in Northern San Diego County at 12460 Keys Creek Road in Valley Center.  It is San Diego County's only USDA certified organic lavender farm.  The farm has more than two dozen varieties of lavender spread over eight acres of land.  After harvesting, the lavender is processed into a variety of products which are available for purchase at the farm gift store.  Tea parties, classes and workshops, and essential oil distillation demonstrations are available.
Tucked away on 8 1/2 acres in Valley Center, this fragrant oasis is a shimmering sea of purple, offering the perfect retreat for a South African native in search of spiritual transition. Alicia Wolff, originally from South Africa, has lived in Southern California since 1989.  When she saw the lavender fields in 2008 she instantly felt a connection to the land.  There is energy on this property, located in the foothills of Palomar Mountain that brings a deep feeling of serenity, coupled with the sweet fragrance of lavender.
"When I found this it was in September 2008 and everything was dormant, no lavender to be seen, but I just fell in love with it," Alicia said. "Later when the lavender bloomed it was just a bonus.  It's a dream come true."
This is a working farm.  All the lavender is harvested by hand and distilled right on the property.
“October is one of my favorite months of the year, as I love the fall or autumn as we say in South Africa,” Wolff adds. “To celebrate the change of season; and since Halloween is just around the corner we are offering a new menu that is deliciously wicked.  We will have a talk about growing lavender and. In addition, the Farm Store will be open from 3 - 4 p.m.”