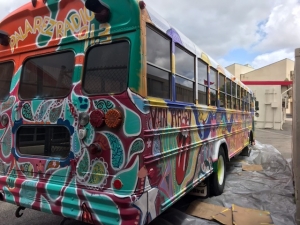 May 23, 2019 (Fallbrook) - Just in time for the 50th anniversary of Woodstock, an old school bus donated to North County FM station Rez Radio 91.3 by the Bonsall Unified School District is nearing completion of its custom paint job commissioned with students from the Art Department at Fallbrook High School.  As the school year draws to a close, an army of students led by graduating senior, Caiden Metts are hard at work putting the finishing touches on the 60’s hippie-themed work of art.  It’s quite a spectacle.

The idea came about when Rez Radio changed its call letters early last year to the San Diego heritage call sign, KPRI – now standing for Kupa Pala Rez Indians.  That brought forward a number of people from the air staff of the original KPRI in San Diego when the station first tried free-form FM programming in 1967-68.  Much of that music is still a core element of Rez Radio’s programming.

Over the next six months, that common heritage, the mandate of programming KPRI then and now to an underserved audience, and the impending Woodstock anniversary led to the idea of creating this latter-day hippie bus.  Fallbrook High Art Department head, Bill Richardson agreed that the project would check a number of boxes including studying of a period of rich pop-art culture and practical experience at creating a large public work of art.  Design and layout began over the winter.  The project is expected to be complete by graduation and the bus will hit the roads of North County sometime in June.

Fallbrook is the second oldest high school district in San Diego County, dating back to 1893.  The current campus of FHS at the intersection of South Mission and Stage Coach Roads in Fallbrook opened in January of 1957.  The Warrior mascot was chosen in part to honor the strong athletic talent attending the school from local North County reservations, which included Pala until the creation of Bonsall High School five years ago. 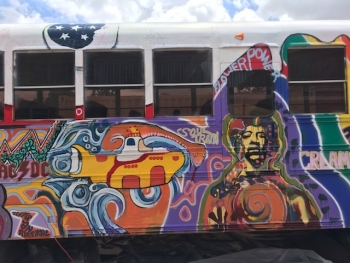 Rez Radio 91.3 / KPRI is owned and operated by the Pala Band of Mission Indians.  The non-commercial FM station streams live 24/7 on iHeartRadio, TuneIn.com, and on our website, www.RezRadio.FM with a mix of programming including a broad cross section of music, news, talk and even old network radio shows from the 1930s through 1950s.  Rez Radio is the exclusive Southern California home of the Wolfman Jack Show.  Since broadband service can be spotty in parts of inland North County, you can also hear the station on a listen line, 712 775 5748.