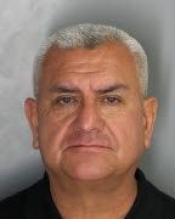 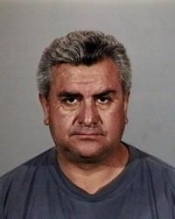 Sheriff’s Department, Fallbrook Substation, have arrested Enrique Lopez Torres for  24 counts of possession of obscene material (depicting children under 18), three counts of annoying/molesting a Child, three counts of Lewd Acts with a child and one count of false imprisonment with violence.

After discovering photos showing Torres having sexual relations with children as young as ten years old, authorities are seeking public help to identify other possible victims. Torres is believed to have previously resided in San Marcos, Escondido and Downey (Los Angeles area).   (photos of suspect in 2009, left, and 2000, right).

On September 9, 2009, at approximately 7:00 a.m., an 11-year-old female victim was waiting for the school bus in the 200 block of Clemmens Lane in Fallbrook. The suspect approached the child and engaged her in conversation, according to the Sheriff's report. He grabbed her hand and held it without her permission or consent. The little girl tried to pull her hand away from the man and he continued to hold onto it for about 20 seconds. While trying to pull away, the bus arrived. The suspect, later identified as Enrique Torres, then let the girl go and she ran to the bus crying. The bus driver then took her to school and reported the incident to the school principal. The Sheriff’s Department was immediately notified. 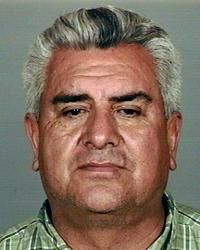 Based on the statements of the victims and the circumstances in this case, Torres was placed under arrest initially for annoying/molesting a child and false improvement. He was transported and booked into the Vista Detention Facility. (photo, left:  Torres in 2004)

Based on the above investigation, detectives were granted a search warrant for the suspect’s residence. During the search of the residence, several Polaroid photographs were discovered in the night stand next to the suspect’s bed. The photos depicted young females ranging in age from 10 to15 years old in various stages of dress, and/or engaged in sexual acts with the suspect.

Based upon evidence found during the execution of the search warrant, Torres was re-booked for 25 counts of possession of obscene material (child pornography) and three counts of lewd acts with a child. His bail is currently $330, 000.

Detectives believe Torres may have assaulted and/or victimized other children. He has resided in the Downey (Los Angeles) area, on Kellogg Drive in the City of San Marcos, and possibly in the City of Escondido.

Detectives are asking anyone with information to please contact Detective Dan Laibach at the Fallbrook Sheriff’s Substation at 760-451-3110 or the Sheriff’s Communication Center at 858-565-5200.

My personal opinion about this kind of people, they need not to have place in this world. Imagine, due with their personal interest and desire, many people specially children were abducted, molested and abuse. If I were to ask, they should have not imposed bail for him. Office Software