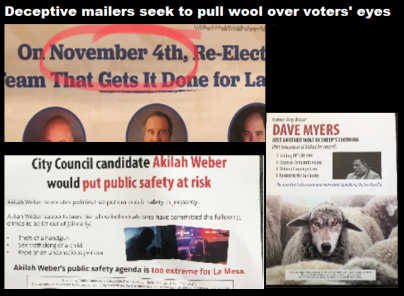 Updated with comments from Councilmembers Baber and McWhirter, plus additional information on the Public Safety Advocates PAC.

One mailer paid for by the Baber-McWhirter campaign urged Democrats to vote – on the wrong date. (The election is Tuesday, November 6th.) The flyer had photos endorsing Republicans McWhirter and Baber as well as Mayor Mark Arapostathis, who is running unopposed. Baber says this was his mistake. "It was a typo. I wish I had Miriam as my editor!" he quipped. His campaign later sent a corrected copy, which he forwarded to ECM.

Two other mailers were sent by the “Public Safety Advocates” PAC in Encinitas and include negative information on the two Democrats, including false statements about Weber

Asked about the mailers targeting Weber and Myers, Baber told ECM, "I had nothing to do with either one of those. I didn’t fund it, direct it. I wasn’t the treasurer. I didn’t approve it.”

Today, McWhirter told ECM that people have accused him of being behind the most recent mailers. But he says,"Four years ago, I vowed never to do it again. I have kept my commitment. I had nothing to do with them. No money and no input."

According to a Coast News article in 2016, “The PAC has been active since 2014, and according to the expenditure form, has been backed heavily by local developers, including LHR Investment LLC — a subsidiary of Lilac Hills Ranch developer Accretive — Sudberry Properties, the Western Electrical Contractors Association, the California Real Estate PAC, and the Building Industry Association of San Diego.”

A November 2018 article indicates the PAC also got money from the San Diego County Deputy Sheriff's Association, which opposes Myers.

While it’s unclear why the PAC targeted candidates in La Mesa, particularly Weber whose background is in medicine, not law enforcement, clear beneficiaries of such negative mailers would be Baber and McWhirter. Baber has been a registered lobbyist for the Associated Builders & Contractors in San Diego in the past. 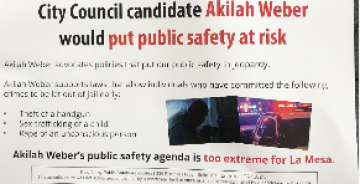 The current hit piece targeting Weber, a mother and physician who heads up the children’s OB/GYN unit at Rady Children’s Hospital, is particularly vile.  It claims she “advocates policies that put your public safety in jeopardy” and that she supports early release from prison of offenders who committed child sex trafficking, handgun theft and rape of an unconscious person. A photo shows a masked burglar breaking into a structure.

Weber issued a strong statement denouncing the mailer as false.  “We are now on the verge of winning this race and the opposition knows it. So our opponents got desperate and went negative dropping a negative mailer full of false claims about my stance on public safety issues,” she writes, adding, “Nothing in this negative mailer is true. Our opponents are just bringing character assassination, fear, and dog-whistle politics to the Jewel of the Hills, our La Mesa.  This is unacceptable.”

Our internet research found zero substantiation for any claims on the flyer. Moreover, Weber’s mother, Assemblywoman Shirley Weber, has a record of supporting and authoring legislation to help crime victims including victims of sex trafficking.

Another flyer from the developer-backed PAC slams Myers as a “wolf in sheep’s clothing” claiming he “opposes democratic values,” has campaign finance violations, and “panders to the gun lobby.”  A photo on the piece depicts sheep. 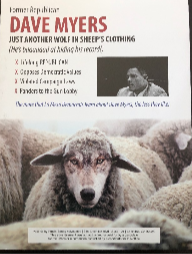 Myers is endorsed by the San Diego County Democratic Party in this race and the party also endorsed him in his primary race against Sheriff Bill Gore.  A candidate out of step with party positions on many issues cannot receive the endorsement.

In his race against Gore, Myers did win endorsement from a local gun owners’ PAC for stating he believed Gore should issue more concealed carry permits.

Baber, an elections attorney, said, "Myers' violation was extremely minor and it was unfair of the Public Safety Advocates to raise that against him." Per the FPPC, the violation was technical and not substantive due to an incomplete filing resulting from a software glitch in their onlne system. Myers was not fined, according to the letter he received. 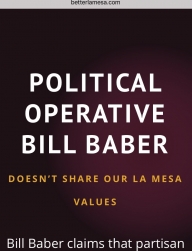 cebook targeting Baber as a "political operative" for actions of one of the clients he serves as campaign treasurer for in a Solana Beach race. "It was a bogus claim," Baber said, adding, "I don't have any control over that client's free speech rights."

An earlier version of this article reference a campaign finance allegation filed against Baber, but the allegation was dismissed.

Integrity and ethics are at the heart of La Mesa’s Council election this year. Not everything strictly legal is ethical. An incumbent team running under the leadership of a candidate up for a fourth term – when La Mesa voters recently adopted a three-term limit – is just one example. Loophole-legal, but hardly ethical. There is a pattern here. These despicable mailers and the reckless destruction of a challenging candidate’s property are central to it. The underlying cynicism cannot be explained away as mere political spin. It is a rude thumb in the eye of anyone who genuinely cares about this town. Where is the city’s leadership? The senior elected official on this team, the mayor, knows how hurtful these mailers are. When will he find the courage to say “Enough!” Why the silence? Remember, we are watching the same crew steer La Mesa politics into the gutter for a second time. These cynics and their situational ethics deserve the boot, not our vote.

And then wait and Listen for the very sincere sounding Disclaimers from at least two of them come Nov. 7th! wink wink! Really though Bill, Guy, and Mark. When it comes down to the respect you’ve now squandered, does the end really justify the means?

You mean means don't you? Or in ghetto lingo...you means means. Or how about U mean's mean's. Voting Red for sanity. I hope you're aboard matey.

A tip of the hat for the correction! I’m Voting for the best Candidates for the position’s. The Mailer’s cleared that up for many. Barrage’s of false claim’s and innuendos don’t earn my vote. They merely serve to show their true integrity and character and I sincerely thank them for revealing that to all of us in La Mesa.