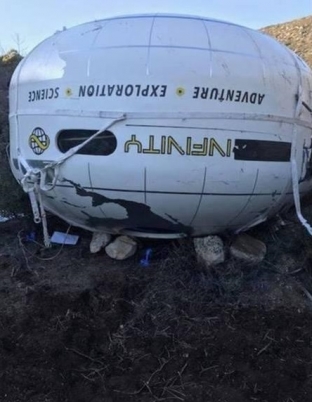 He was testing high-altitude technology in his experimental craft when he made a soft landing near Chihuahua Valley Road and State Route 79 on Sunday around 12:45 p.m.  Sheriff’s deputies were dispatched to the scene after getting reports of a possible crash.  But after the balloon riders told deputies they were not injured and did not need help, deputies left, according to Lt. Mike Rand, Patch.com reports.

While Nott and his passenger were preparing the balloon’s cabin for retrieval, the balloon’s passenger compartment became detached and plummeted approximately 150 feet down a slope.
Deputies returned to the scene around 3:30 p.m. after a caller reported that two balloon occupants had suffered back injuries and one was going in and out of consciousness.  A Sheriff’s helicopter was used to free Nott and his passenger, 64, who were transported to Palomar Hospital in Escondido via a second helicopter.
No update on the condition of the passenger has been provided.