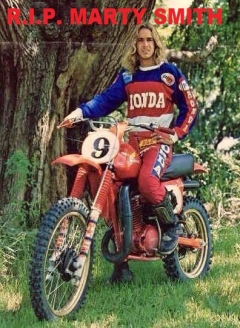 By Miriam Raftery
April 28, 2020 (Alpine) – Motocross Hall of Fame champion Marty Smith, 63, died yesterday along with his wife, Nancy in a dune buggy accident at the Imperial Sand Dunes in Glamis, California.
The couple lived in Alpine and are survived by two daughters, a son and grandchildren.
TMZ sports reports that the couple was in a dune buggy that flipped and rolled down a hill. According to TMZ, Marty Smith was not wearing a safety harness and his wife wore only a lap belt.
Lee Rampage posted “with a grieving heart” on social media that he and his wife, Tammi, were with the Smiths when the crash occurred.
“We spent at least an hour trying to save their lives before first responders arrived. Marty took his last breath while I was holding his head, keeping his airway clear. Marty was my best friend and I tried everything in me to save him while Tammi tried to save Nancy,” he wrote. Nancy was airlifted to a hospital, where she later died.
After turning professional at age 17, Smith went on to win three AMA National Motocross Championship races as well as the U.S. grand Prix of Motocross. He placed fourth in the 15cc World Championship in 1976.
He broke his hip in 1978 at the Houston Supercross but never regained his championship speed, retiring from motocross after the 1981 season. However he stayed active, teaming up with colleagues to win the Baja 1000 desert race in 1991. In 2000, he was inducted in the AMA Motorcycle Hall of Fame. He was also a motocross coach.
Vickie Kerley recalls Smith as a “legend” in an email to ECM.  “His parents and mine went to Pt. Loma High, as did Marty, together and were life-long friends.”
In his final interview just published in Motocross Magazine, Marty Smith reflected back on his illustrious career and life.
“There are things that I would have loved to have done in my career that I did not, but I am absolutely 100 percent satisfied with how my career went,” he said. “I am very happy where my life is now. My wife and I are still very much in love and have been together for over 40 years. And with my kids, and all my grandkids, I would not trade any of that for the world.”

Why did they not have a five point harness?

RIP and good thoughts to their friends and familys.