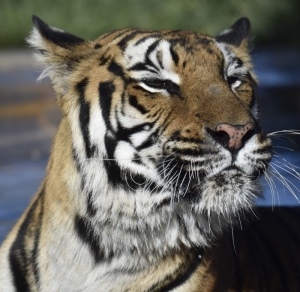 November 26, 2015 (Alpine) – Lions, Tigers and Bears sanctuary in Alpine has announced the death of its beloved matriarch tiger, Natasha, who was 19 years old.

“Natasha was the epitome of the old saying "that's one tough cookie", as she had more than her fair share of struggles over the course of her life, but always came out on top,” a post on the organization’s Facebook page states.

Natasha and her late mate, Raja, were the founding tigers of Lions Tigers & Bears over 13 years ago.

The pair was rescued from Texas where they were being kept in a 6' x 12' chain link cage with concrete floors, and no shade or shelter to protect them from the harsh Texas elements. After learning of Natasha and Raja's situation, Lions Tigers and Bears founder Bobbi Brink worked tirelessly to raise the funds for their rescue, obtain necessary permits and coordinate transport for both tigers - all within one month. In 2002, Natasha and Raja arrived at the Alpine site.

Upon arrival at her new home, it became apparent that Natasha was pregnant, and after just one month of being rescued, gave birth to two cubs - Sitarra and Tabu.

“Natasha was always quick to greet you with a chuff - her friendly way of saying hello. A very food oriented tiger - Natasha never passed up the opportunity to enjoy a bite to eat. She was always sure to let you know how appreciative she was with her famous "nom nom nom" noises, that were sure to make you laugh and bring a smile to your face,” LTB’s Facebook post recalls. 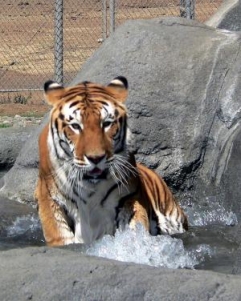 Through the generous support of the McGrath Family Survivor's Trust and many other donors, the facility was able to build the Tiger Trails habitat and for the first time in their lives, Raja and Natasha were able to feel grass under their paws, look up to an open blue sky and splash and swim in the waterfall pool that they both enjoyed so much. (See East County Magazine’s article and view our video of Natasha and Raja on the first moment they were released into the Tiger Trails habitat: http://www.eastcountymagazine.org/a_purr_fect_place )

Natasha was declawed at an early age by her private owner, causing her to suffer from arthritis for the majority of her life. In 2011, Natasha was diagnosed with uterine cancer, underwent surgery, and made a full recovery after which she continued to enjoy life at LTB. In 2013, Natasha lost her daughter Sitarra unexpectedly, and 8 weeks later, suffered heartbreak once again, from the loss of her lifelong mate – Raja

Earlier this year, Natasha underwent ocular surgery to treat a subluxated lens - a result of glaucoma. After further examination, the repair was not possible and veterinarians had to remove the tiger’s right eye.  About two months ago, a lesion was found in Natasha's mouth. A biopsy revealed the lesion was non-cancerous, but Natasha's blood panel also revealed signs of chronic renal disease, which is a common illness in aging cats.

Over the last few weeks, her health declined, though  vets continued to work to stimulate her appetite, provide needed nutrition, and keep her comfortable. 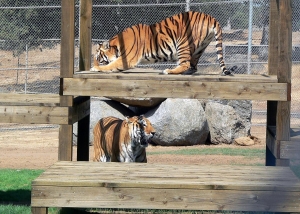 “Natasha's passing is the end of an era for LTB, but one that will live on in her remaining daughter, Tabu - and forever in our hearts,” LTB’s statement concludes. “Natasha - you will be missed by so many, our precious girl. Rest easy and run free.”

A memorial for members, family and friends will be scheduled to celebrate Natasha's life in the coming weeks.