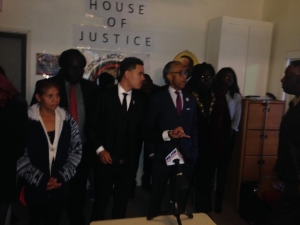 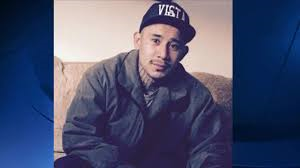 As the cameras rolled, Sharpton and Harris stood side by side with the families of Alfred Olango, Jonathon Coronel, Sergio Weick, and James Lacey, all of whom died during encounters with the police. The activists spoke on behalf of the families and expressed their concerns regarding fair and unbiased investigations into the deaths of their loved ones.

According to Sharpton, the only way to ensure fair and equal treatment is to “take local investigations out of police and prosecutors hands” and turn them over to California Attorney General Xavier Becerra’s office for review.

Families of the victims are calling for justice in police shootings, some involving unarmed suspects and what family members believe was excessive use of force. For instance, the autopsy released by the San Diego Medical Examiner’s Office for 24-year-old Jonathon Coronel of Vista, California, revealed he suffered 22 gunshot wounds. Coronel was shot and killed by Deputy Christopher Villanueva on July 5, 2017.

According to the San Diego County Sheriff’s Department, Coronel, a documented gang member wanted on a probation violation, fled a vehicle he was seen in. Deputy Villanueva pursued Coronel on foot. During the confrontation, Villanueva discharged his gun, killing Coronel

No weapons were found on Coronel at the time of the shooting; however, a sheriff representative mentioned a sharp objective, along with a knife, were found in the path Coronel took while fleeing. It is undetermined if those items belonged to him SDSO stated. 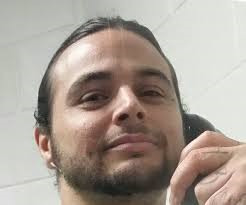 The shooting of Coronel is the second police shooting which involved Deputy Villanueva. The first occurred on August 11, 2016. Villanueva and Deputy Peter Myers attempted to pull over 33-year-old Sergio Weick, a Vista resident and documented gang member, while driving his Lexus. Weick had an active warrant for his arrest and refused to pull over. He eventually crashed his car and took off running on foot. Deputies Villanueva and Myers pursued him, according to the Sheriff’s department. 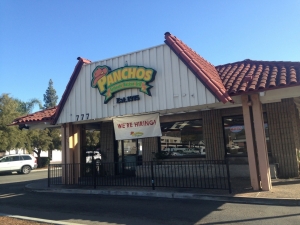 Photo, right:  front of the restaurant where Alfred Olango was killed

Sheriff investigators claim that once the deputies encountered Weick, he reached for his waist as if reaching for a weapon, and was shot. Officials said he was searched and a knife and shotgun shells were found on him. Weick was taken to the hospital in critical condition where he later died.

The autopsy report revealed 27 separate wounds, consistent with 18 multiple penetrating and perforating gunshot wounds to the head, torso and extremities. 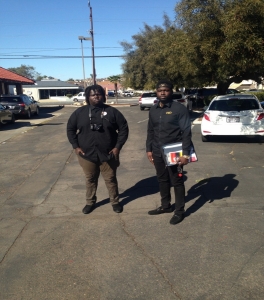 The families of Sergio Weick and Jonathon Coronel filed civil rights cases in San Diego federal court against the county, the Sheriff’s Department, and the deputies involved in the shootings.

Harris told reporters “all police are not bad” but “the City has problems it is not dealing with.” He further stated that “police reform must be central to the elections.”

A family member, who still wrestles with the fact that his loved one is no longer here, is Tony Abuka. His brother, 38-year-old Alfred Olango, was shot and killed by El Cajon Police officers on September 27, 2016, in El Cajon, C 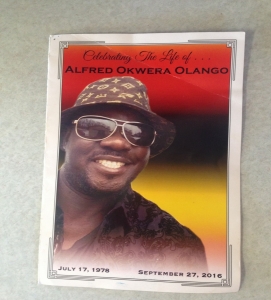 According to Abuka, Olango was having a hard time dealing with the death of a close friend. He paid his sister a visit and she became concerned about his behavior. She contacted the police a total of three times and requested a psychiatric emergency response team (PERT) to be dispatched to her residence. Before the police arrived, Olango left his sister’s home on foot and wandered into the Panchos restaurant parking 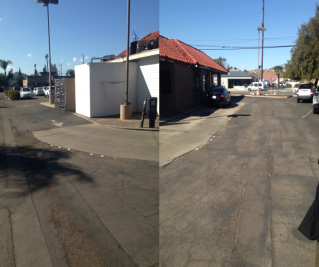 Photo, left:  the drive-thru where Alfred Olango was killed

Two police officers were dispatched and spotted him in the parking lot. One cruiser entered through the drive-thru, and the other cruiser pulled in back of the restaurant, Abuka said. Officers Richard Gonsalves and Josh Daniels approached Olango.

Officials say Olango refused to comply with directions to take hands out of his pockets. He withdrew an object and took what appeared to be a shooting stance.  He pointed an object at the officers who believed it to be a gun. Officer Daniels then fired his taser and Gonsalves shot him. He was taken to the hospital and later died.

The autopsy released by the Medical Examiner’s Office revealed Olango was tased simultaneously while being shot four times. The District Attorney’s Office ruled the shooting justified.

The sister and father of Olango are suing the City of El Cajon in separate suits. When asked what he will miss most about your brother, Tony simply responded, “everything, I will make sure he’s never forgotten.” The family established The Alfred Olango Foundation.Org to assist other victim families.

The families are outraged with the findings of the district attorney’s office, which concluded that all of these shootings were justified. Sharpton stated of the families’ concerns, “All of [these] incidents cannot be wrong.” 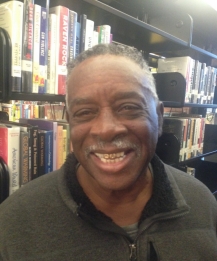 e Jones is still devastated over the loss of his brother, 47-year-old James Lacy, who was shot and killed on August 4, 2017, by two sheriff’s deputies in San Diego, California. According to police officials, when Deputies Sean Ochoa and Don Wood attempted to serve an eviction notice to Lacy at his residence, he yelled that he would kill the deputies though a locked door. 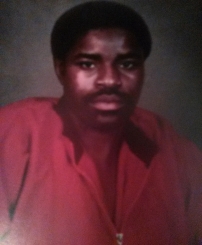 Lacy was fatally shot by both deputies when they forced the locked door open to find Lacy moving what the law enforcement officers believed was a semi-automatic handgun in their direction, officials said. Lacy was taken to the hospital and later died. 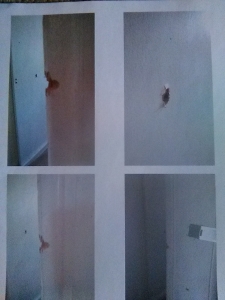 Jones claims the gun his brother had was a toy gun with a red tip. A civil suit against the city was filed by the family. Jones says he will miss Lacy as his baby brother because they were a close-knit family.

Raymond Wiley, 67, of Encanto, stood in solidarity with the families at the press conference. He is not a victim of police shooting, but currently has a civil rights case pending against the City of San Diego. Wiley claims he was racially profiled while power walking near his home: at the time of the incident, he was 66-years-old. 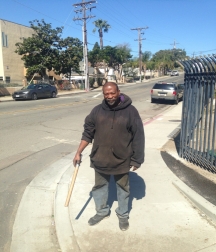 Photo, left:  Raymond Wiley with walking stick at the corner of 67th and Atkins

Wiley states he was walking east on Atkins in Encanto around 6:30 a.m. on July 21, 2017. He carried with him a makeshift walking stick to ward off stray dogs. A patrol car heading west on Atkins passed him, made a U-turn, and pulled up behind him, as he crossed the street at the corner of 65th and Atkins.

According to Wiley, the officer got of the car and told him to drop the stick, then proceeded to handcuff him. When asked why he was carrying the stick, Wiley explained about the stray dogs. 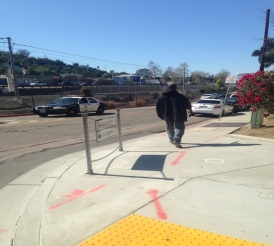 Photo, right:  Mr. Wiley preparing to demonstrate where he was walking when the officer in the police cruiser asked him if he was at the rec center

The officer asked if he could search him. Wiley responded with a 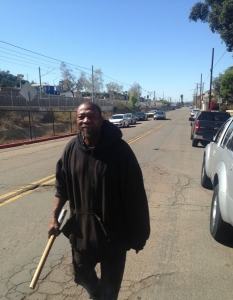 “yes”. The officer found a key in his pocket.

Photo, left:  Mr. Wiley demonstrating his walk on the morning of the arrest.

Wiley attempted to tell the officer the key is to his granddaughter’s Chevy Cavalier; but the officer interpreted the key to be a shaved key; and combined with the walking stick comprised a felony; and took Wiley downtown. He was booked on possessing burglary tools. Wiley’s family contacted NAN and Harris immediately began work on the case. 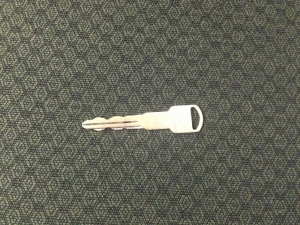 Wiley spent the night in jail and was released the following day. Ultimately, the burglary charges were dropped against Wiley due to the city not able to prove its case.

It is interesting to note for this interview that Mr. Wiley gave a demonstration showing where he was walking at the time of the initial incident back in July. As he walked down the sidewalk, a police car drove by and the officer asked him from the vehicle, “Did you just leave the rec center?” Mr. Wiley said, “no.” I was dumbfounded. The officer then asked me if I was “okay.”

I asked the officer if I could ask him a question. He said, “Yes.” I asked, “Why did you ask him that question? The officer stated, “I just got a call about an angry man with a stick at the Skyline Recreation Center.”

I told the offic 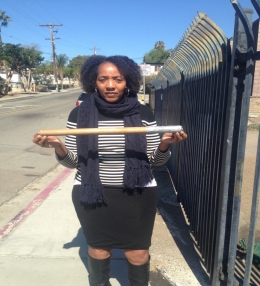 er we were nowhere near the recreation center. The officer said, “Okay,” and drove off.  Mr. Wiley then commented, “I am so glad you were with me. What if you weren’t, what would have happened?”

Photo, left:  East County Magazine reporter Maridian Broadus with walking stick moments after the police officer asked Mr. Wiley if he was at the rec center

Sharpton and Harris are standing strong to answer “what happened” questions. Harris vows to continue to speak up on behalf of the families. He concluded the press conference with these words: “Until you get exposure, things won’t change.”